We had a spare day in Auckland recently and so took the opportunity to have a look at a few yachts on display. Last year we happened to be in Barcelona while the boat show was on, and we saw the new Bavaria 38, and were surprised at the base cost! So that planted the seed in our mind that purchasing a brand new yacht might be something that our budget will stretch to.

Last week we had a look at the Jeanneau Sun Oddyssey 379, The Hanse 385, and the Dehler 38 and we also met with the Bavaria dealer, but they didn’t have a new yacht that we could have a look at.

We took along a checklist of all the things that we wanted to see based on the things I have listed in the blog under “The Yacht” so that we had a schedule of things to look at and could compare apples with apples so to speak.

There is negative feedback about production yachts being too flimsy to sail around the world, and I admit to having previously been wary of plastic fantastic production yachts. However if you look at the list of yachts that are entered in the ARC there are heaps of production yachts on the list. They are all built to the CE certification A – Ocean, so they have to meet certain structural and safety standards, and as these guys produce hundreds of yachts each year, I am sure you would soon hear about any major flaws and that could potentially destroy the reputation of those companies should the masts or keels start falling off these yachts!

So the price is pretty much right, we can get something built brand new and exactly to meet our requirements, and delivery can be in Europe excluding VAT/GST and any freight charges – meaning further savings. We can start our cruising in the Med and work our way back across the Atlantic and Pacific over the following years and eventually back to New Zealand.

We have decided that we are keen on something in the 36-40ft size range. We are both relatively short so head room isn’t an issue for us, but we want something that we can easily sail double handed, or single handed if one of us is incapacitated in some way. So anything bigger was just going to become difficult in that respect. Marina berths are easy to come by in this size range too. And of course everything becomes bigger and more expensive as the size of the yacht increases. We are looking for a 2 cabin layout and preferably with saloon seating that can convert in to a double bed or a sea berth with a lee cloth. So we will have room for guests and the kids, but will also have a dedicated lazarette for storing all our stuff! And finally something with a draft of less than 1.8m so that we can take her through the French canals and other inland waterways.

Here are the things we liked and didn’t like about each yacht:

I wasn’t sure that I was going to like this yacht, and I am not sure why now as we absolutely LOVED it! When we initially looked at the Barvaria 38 I really liked the full fold down swim platform, and the Sun Odyssey only has a partial fold down platform – but having seen it in the flesh, I now prefer this, as it enables you to have extra storage, space for 2 gas bottles, and a place to sit while on the helm. The swim platform had a built in fold out ladder, and there was also storage in the cockpit floor for the liferaft. Also when the stern was folded up there was a small ledge where you could step on the very back of the stern and then up and over the transom. Handy if you are moored stern in.

We love the twin wheels as it seems to give you so much more space in the cockpit. The huge wheel of the past just seemed to block the flow from the companionway to the sea. The twin wheels seem to flow really nicely. The table in the cockpit folded away nicely and there was still lots of room to move around it and it provided a secure hand hold. There were also some handy cubby holes built in to the table for storing things like sunglasses, sunscreen, binoculars etc.

They have three keel options, but the 1.5m shoal draft is probably the one we would go for, and we have been told that with this option you don’t compromise on any upwind performance.

The mainsail was conventional with reefing points and lazyjacks which is what we were after, and there are a variety of different options for headsails on furlers to choose from.

The motor is a Yanmar 29hp sail drive. I have got a smaller version on Wildwood and I am happy with the performance and price of consumable parts etc.

The anchor locker is a huge watertight compartment taking up the whole bow of the boat, so it provides a bit of a buffer were you to accidentally hit something while sailing along. There was ample space for lots of chain, spare anchors and fenders etc in this locker.

In the interior, the saloon couch could be converted to a double bed, and the other side could easily be used as a sea berth. The galley had an impressive amount of storage, and a large under bench fridge. The head was spacious and had access through there to the lazarette. All the systems, keel bolts, sea cocks, wires etc could easily be accessed through various opening panels. The cabins also had plenty of storage, great lighting, ventilation and blinds on the windows.

The price was about what we were expecting to pay as well. The one we looked at just sold for NZD$320,000. The base price is usually around NZD$200,000 ish and then you pay extra for all the options that you want to incorporate. We would also pay less as this price included GST and delivery costs to New Zealand.

So all in all – the Sun Odyssey was our absolute favourite so far, and you don’t just have to take my word for it. Check out this review: http://billspringer.blogspot.co.nz/2012/04/jeannueau-sun-odyssey-379.html

I was expecting to really like the Hanse. The yacht we looked at was a couple of years old, but is still the new twin helm model. I am not sure what it was, but it all just looked a bit drab following the Sun Odyssey.

All the halyards, and sheets lead to two aft winches, and they had fantastic lockers for all the line ends to be tidily stowed away in. Also this means that the dodger can be mounted flush on the deck, and you wouldn’t get water being pushed through where the lines come. However I thought the cabin top looked a bit funny with no winches on there, and while that set up would be great for a couple, if you were sailing with friends, then everyone would be a bit busy in around the helm and winches all together!

The stern folded completely down to provide a huge swim platform. The ladder was stowed separately, but there was less storage and only space for 1 gas bottle with this set up. There was also a handy liferaft cupboard which was exposed when the platform was down. Not sure how well this would work though if the sea was really rough- could be hard to fold down the platform and get the life raft out perhaps?

The interior was nice, but again I preferred the Sun Odyssey. The systems didn’t seem quite so easy to get to, and I can imagine that if there was an issue of any kind it would probably require removing huge sections of the interior to find it. The galley storage wasn’t quite such a good use of space as the Sun Odyssey either. The fridge had a top and side opening.

So overall – the Hanse was a lovely yacht, but we just preferred the Sun Odyssey to this one.

The yacht we looked at had just literally arrived off a ship and was in the process of being commissioned, so we couldn’t get a perfect feel for this yacht without the mast, wheels, and interior all covered up, but we used our imagination as best we could!

There were some very sexy things about this yacht, the head door was a great design how it folded both ways to either have an open plan bathroom, or completely closed off. However the toilet itself was a bit pokey. The doors also didn’t have latches on them, they used a magnetic type system which was very smart. The interior was nice, but again it was all partially covered, and the main saloon cupboards opened upwards, which I thought might let everything spill out, but I am sure that is something you would get used to. The windows were also very slimline and sexy.

In the cockpit – again the transom folded out to a fabulous huge swim platform with the two wheels, but again that meant a compromise on storage, and so there was only space for 1 gas bottle. The Hanse only had 2 winches – well the Dehler had 6! Lots going on in here and this felt like a racier version of what we had seen in the Hanse. The cleats also popped up and down which I also thought was very flash. But some of the stanchions had extra support bits coming out on the side, which I can imagine catching my toes on when walking forward.

The other downfall was the traveller in the cockpit. Again I am sure this is something you can get used to. My yacht has a traveller right outside the companionway, but it is probably the biggest safety hazard we have on board, and one I would prefer to avoid.

So overall with the Dehler, it felt like a fast yacht, and there were some lovely design features, and although we didn’t see her in her complete state, we still rated the Sun Odyssey as the top one on the day.

We also visited the Bavaria dealer, as the Bavaria yacht in Barcelona was the one that really got us thinking about new yachts in the first place. It was a shame that they didn’t have a new one that we could look at, but they have come back to us with some prices and details, so this is still in the running as well.

So I think we have our benchmark set with the Sun Odyssey, however our minds are not made up yet. We still have time up our sleeves to continue looking, but at least we know we are on the right track and we have a better idea of where things stand in terms of our budget and some of the options that can be added in the build stage. 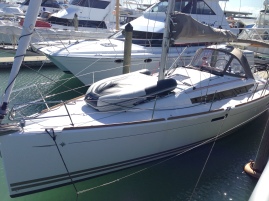