It’s 4.00am and I am covered in diesel. Soaked in stinky slippery diesel. All over my hands, boots, wet weather gear. Its all over the boat too. Hopefully I actually got some of it in the tank?

Andrew does not look impressed. I can’t blame him. I had just woken him up to come and steer while I attempted the diesel pouring in the pitch black rolly sea. He has had a severe case of man-flu for the last three weeks. Even I am starting to feel sorry for him now. He didn’t want to sail home two-handed, but I promised I would do as much of the sailing as possible.

Everything was going quite well up until then.

We had decided the day before that there was a good weather window to come home. So we had gone back in to the marina, unloaded a whole lot of gear in to Andrew’s car, and had a great sleep.

When we woke that morning, the sun was shining and there was no wind. The forecast was for building northerlies for the next couple of days – perfect for our trip south.

The tide was in our favour as we headed out down Tory Channel, and we even managed to give way to all the ferries this time and avoided getting tooted at as we had done a year before. 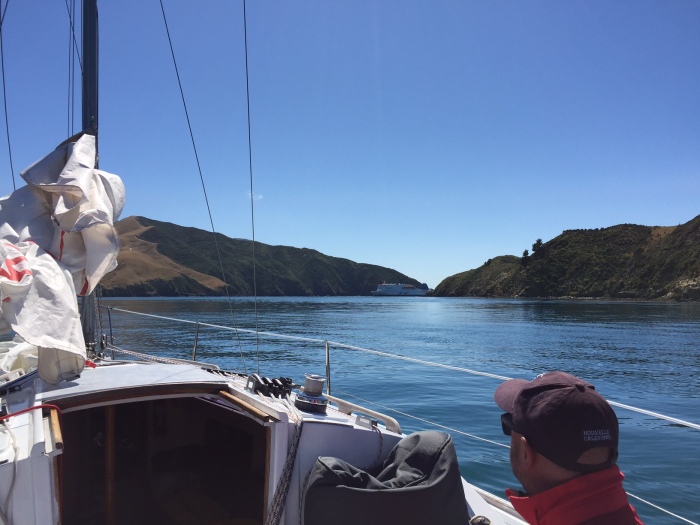 Cook Strait was like glass, and I sent Andrew back to bed as we motored across this often treacherous stretch of water. We’d had a taste of how bad it can get here last year when we flew down Cook Strait in three hours reaching speeds of 15kts over the ground This year it took us five hours to reach Cape Campbell. A much more civilised passage with dolphins frolicking on the bow. 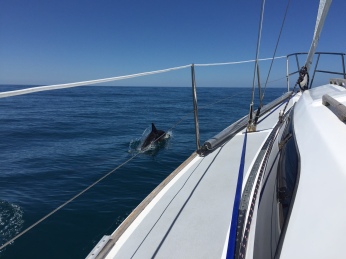 As predicted, the breeze built during the afternoon and we were soon motor sailing along with a full main and #3 headsail, trucking down the coast at 8 kts.

We put a reef in the main to slow ourselves down a bit as the wind built, but once the GPS started reading speeds of 13kts as we surfed down the fronts of the waves, we decided it might be best to take the main down completely.

We had learnt from our experience’s last year! Oh yes you read in all the books – reef early, blah blah, yes yes we know that, but when its really rough, getting the main down isn’t easy, so you put it off. Anyway we get that now. So we wrestled the main down just as the sun was going down behind the Kaikoura ranges. 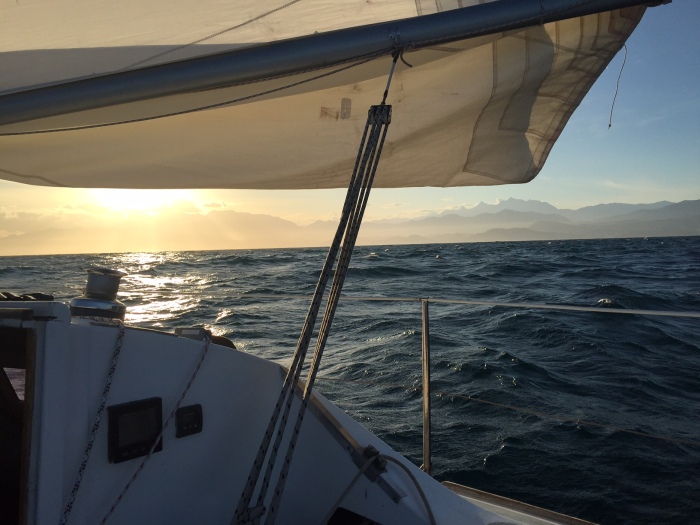 I went to bed for a couple of hours, attempting to sleep, but really just laying there with my eyes shut. I came back up at midnight and sent Andrew back to bed, while I spotted star constellations, satellites, and had to think of things to wish for with all the shooting stars. Life can’t be all that bad when you are struggling to come up with wishes for shooting stars. After all, just being on my boat, sailing in the ocean at night, with my wonderful partner is all I have ever wished for…

At about 3.30am I couldn’t keep my eyes open any longer. Kaikoura’s lights were disappearing in our wake. We had been motoring along since 8.30am and I was getting concerned about how much fuel would be in the tank. We don’t have a gauge, so it’s a guessing game. I think the tank is about 40 litres, and we use roughly 1.5 litres an hour, and we had been motoring for 20 hours… it must be getting low.

So I called Andrew, and that’s when it all went wrong. I had a 10 litre container of diesel. The plan was to put my finger over the nozzle, tip the container upside down and just let it all go in to the tank. Its pitch black, no wind, but a big rolly sea. All was going to plan until we hit a wave, I slipped and nudged the container and the nozzle came off – covering me and the boat in diesel.

I spent the next 20 minutes attempting to clean everything up. I wasn’t tired now! But I went below, removed all my stinky wet weather gear and went to bed. This time I did actually sleep – well for an hour at least. At 5am I started getting a feeling like I was flying through the air. I stuck my head out the companionway and got a face full of salt water over my head.

We were now punching in to a 30kt Southerly. Hmmm where was that in the forecast? I checked the website again – variable 10kts going Northeast 20 in the afternoon. Well this certainly wasn’t variable. It was consistent and the sea was building. I sent Andrew back to bed. Wildy punched through the big waves, taking the occasional one over the bow, with the spray flying back in to my face & eyes. I wish I had my ski goggles on.  We still had just the #3 up, so we didn’t feel overpowered.  We tacked in towards Gore Bay and then tacked back out again, still doing a reasonable speed of 5-6kts, but not quite in the right direction.

I stuffed handfuls of scroggin in to my mouth. Way too hard to try and find something else to eat in the cupboards below. I tried not to drink much as going to the loo in these conditions is like sitting on some crazy amusement park ride with your trousers down.

We punched in to it for six hours. Texts from friends in Christchurch confirmed that it wasn’t very windy there any more, I had faith that it would die down eventually. Andrew came back up to steer for a bit and I went to bed and slept like a log.

When I came back up the wind had changed to a more manageable 15-20kt Easterly. we put the main back up and sailed in an almost straight line towards Godley Head. Only five hours to go!

Banks Peninsula emerged gradually from the haze ahead. We both had sleeps and the next time I awoke we were coming in through the heads to Lyttelton Harbour! Only about 5 hours later than I had predicted had we kept the wind in our favour.

My lovely Mum came and helped us unload our gear, and we tucked Wildy up on her mooring in Corsair Bay.

I came home and realised that I had turned off the hot water while we were away. No hot shower for me, I crawled in to my nice bed and fell fast asleep. Ahhh…

It’s Marina from the yacht club on the line, she asks me if I am on board my boat as it is drifting past the club… “WHAT?!?!?”

Andrew was now being driven back up to the Sounds to compete in the Waikawa Regatta. He offers to come back – “no” I say.

I madly grab the dirty clothes I had been wearing for the past 48 hours, get dressed and jump in my car. God only knows what I must look/smell like, but I don’t care – why the hell is my boat floating about the harbour all on her own!? All sorts of scenarios are running through my head. Thankfully a lovely young man from the Power Boat Centre was out testing a boat and he caught her and brought her back to the floating jetty where the harbour master was holding her when I arrived.

The mooring buoys, rope and chain were all on deck. The shackle must have broken. Why it had chosen to do it now is beyond me. The mooring had been sitting unused since we sailed up three weeks ago. She had strange small gouges down one side, so she had clearly collected something along the way. Not sure what. She had been spotted by a couple of people, apparently she had drifted out past the reef and was on her way back in again. God knows how long she had been floating around for, but thankfully there was no wind so she was just drifting in the tide. Had there been any wind she would have surely ended up on the rocks.

With my mooring now on the bottom of the ocean, I got on the phone to Craig. They were still up in the Sounds. Flying Machine is the boat that Andrew was heading back up to race on over the weekend. He confirmed that I could use their marina berth. I then got on the phone to the mooring people and explained what had happened. They promised to go out and try to find the mooring that afternoon.

I motored over to the inner harbour marina and Alan at the marina very kindly helped me tie up and borrow a dinghy so I could row back from the piles. I removed what remained of the mooring from the cleats on the bow, put patches all over the scratches in the wrap and pulled up the floor boards to confirm that there was no water coming in. Everything looked good.

Now I had to overcome my marina-phobia and fast. Alan offered to help, but there was no wind – I’ve got this! I managed to get in ok and pick up the muddy slimy lines and got her all tied up securely. Now I had a combination of diesel, seaweed, mud, salt and sweat aroma about me. My hair was no longer individual strands, but one huge deadlock. Mmmm niiiice. A fishing boat from Waikawa was tied up at the floating jetty as I rowed back ashore. I exchanged pleasantries with the fisherman. They too had just come down from the Sounds and we chatted about the passage. I must seriously look and smell like a homeless person but he didn’t mention it.

I walked slowly back to my car at the club in my jandals, realising I hadn’t actually eaten anything since the scroggin yesterday lunchtime. The wind was building.  I was tired, hungry, smelly and thirsty but feeling very lucky and thankful for everyone who had helped me in the last few hours.

Now they just have to find my mooring, and I’m off for a long hot shower!