If you are ever in the South Pacific, I can highly recommend a visit to Tanna. We will definitely be back when we sail the Pacific. This time however we were flying in from Port Vila – an hours flight on a tiny plane with Air Taxi Tours. 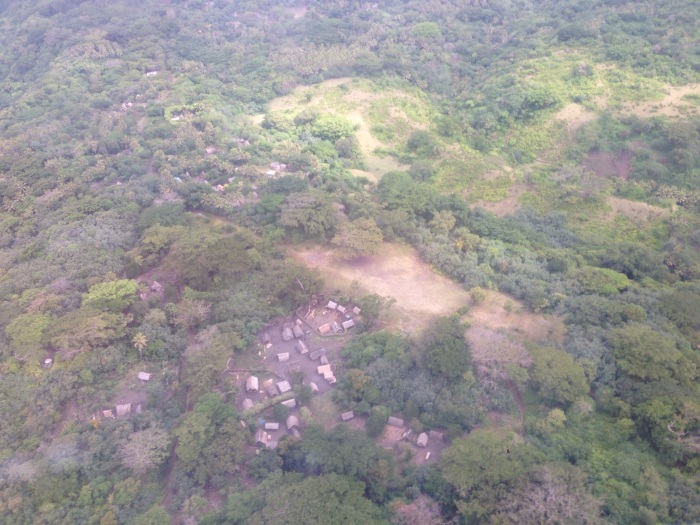 On the way we got to fly over the top of the volcano and look in to its erupting centre! This was done at a very low altitude and this was to be the first of many white knuckle moments of the day! 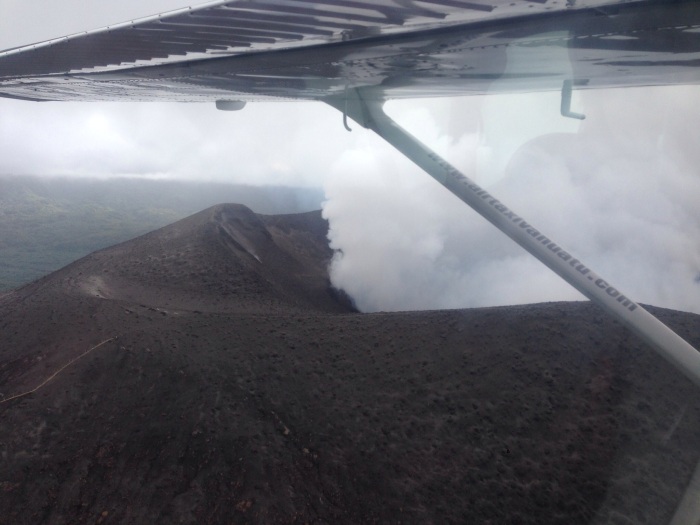 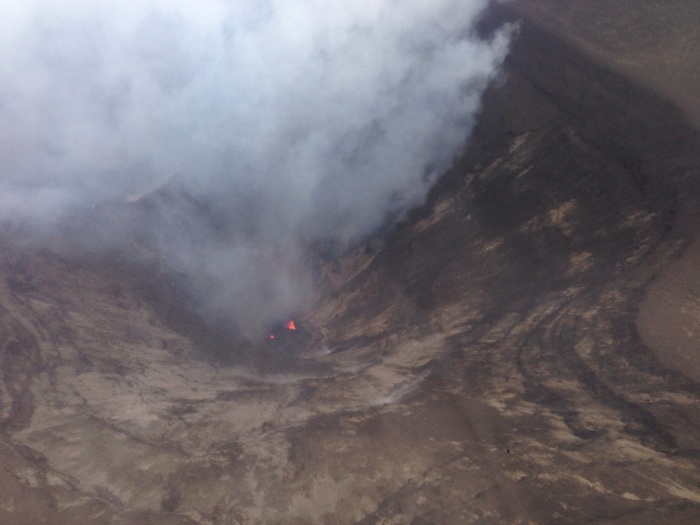 We flew back across the island looking down on some of the hill top villages. People here still live in basic grass huts, but it is all immaculately tidy, and everyone seems to be healthy, happy and friendly. 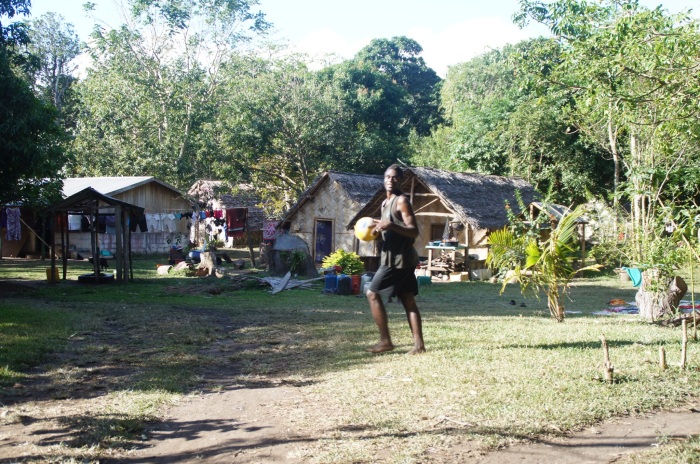 We were transferred from the airport to the nearby hotel Evergreen, which was basic, but clean and spacious and located on the coast of the most amazingly blue water I have ever seen!

From there we took a very bumpy 4 wheel drive across to the other side of the Island – a 90 minute ride over some very steep and uneven roads. All the children waved to us along the way.

We stopped at the bottom of the mountain and I collected a rock of lava for Seth and we took some photos of the gas and smoke pouring from the top of the volcano and where we would soon be standing. It was eerily quiet except for the distant ‘boom’ of the eruptions going on deep inside…

From there we drove around the other side of the volcano and half way up the mountain to a small car park, we then climbed the track to get our first glimpse of the crater. As we arrived and were peering in to the steam there was a flash of light – the shock wave! Followed closely by an almighty BOOM!! Which accompanied with a small earthquake shook you on the inside. A huge bit of lava in the shape of a stingray was propelled high above our heads…. My knees began to knock! From there we were pointed in the direction of the viewing spot, another climb of about 5 minutes on a rough track. The spot was no more than a couple of metres wide – but was quite long. There would have been about 40 people there with us. There were no railings or anything to stop you from slipping over the side and down in to the crater. .. 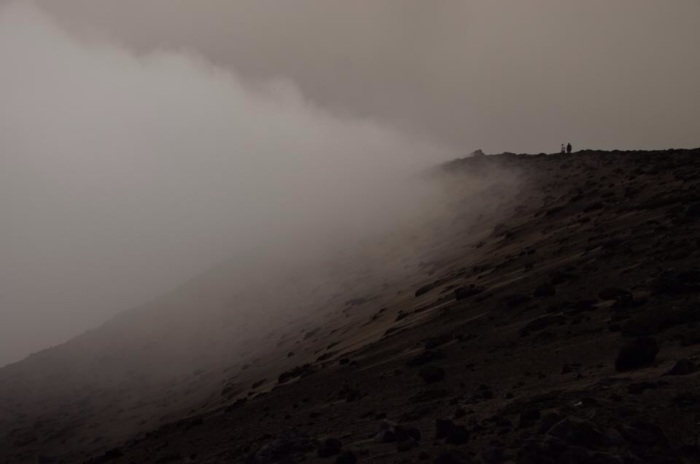 We found a good spot to set up the tripod and camera and I took the GoPro as well. We were there for an hour watching the colours change as the sun went down and playing with the camera settings to come up with some spectacular shots.

It was raining lightly and apparently this is good as it makes the volcano more active. We were there when it was category 1 – I don’t think I would like to be there when it is really active! 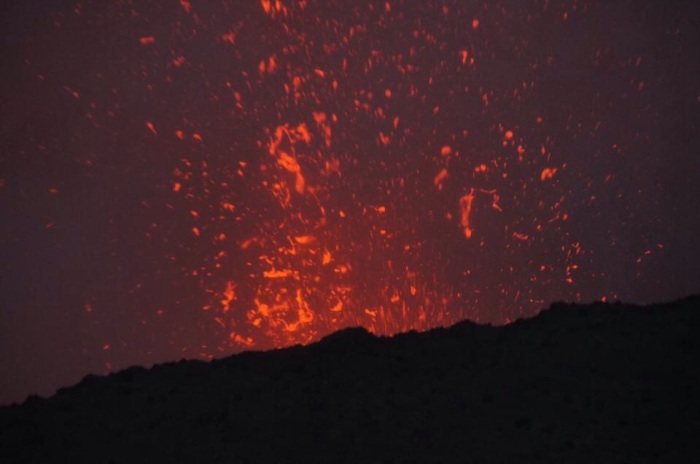 It is hard to describe in words how it was. The smell of sulphur, the ground shaking beneath your feet, the noise and feel of the loudest BOOM you have ever heard go through you, and the lava being thrown to such huge heights not far away. Then hearing it hit the ground and slowly roll back down in to the crater… It was amazing, loud, terrifying an absolutely incredible experience that you need see in person to really appreciate. The photos and video coverage do not even come close to conveying how it really was.

From there it was another 90 minutes drive back to the Evergreen resort. As it was my birthday, we had requested a room upgrade to a lovely villa overlooking the ocean. The rooms are basic, but the atmosphere is lovely and we had an incredible meal there beside the camp fire followed by a birthday cake surprise! 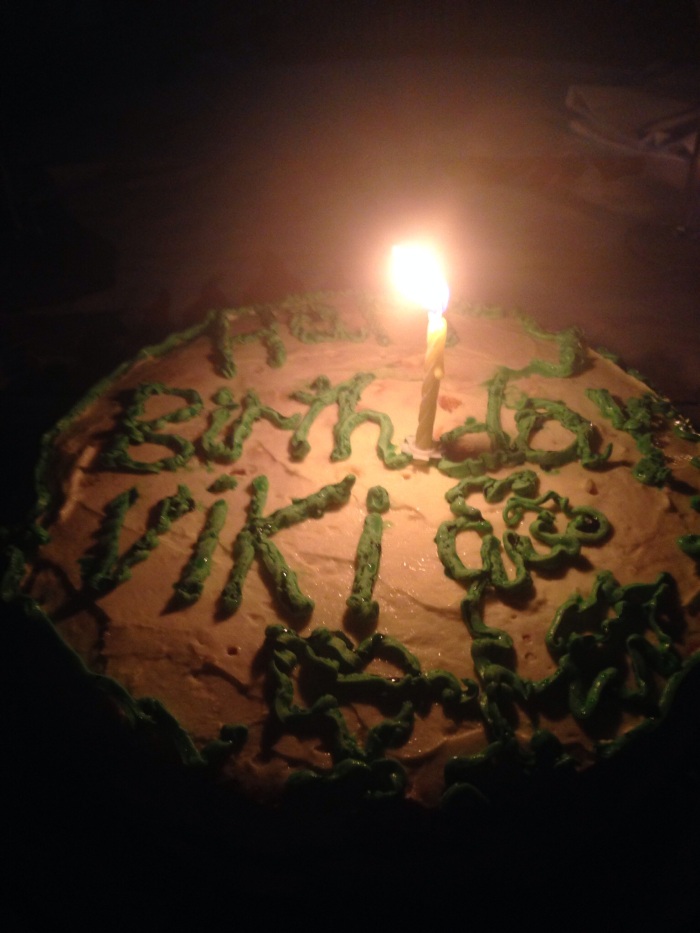 The next day we were up early, had a lovely breakfast and then flown back to Vila. I would recommend spending another night as our whole trip was less than 24 hours and I think there would be much more to see on this Island.

Tips!
If you do go there make sure you take warm clothes for the trip – it was raining and windy when we were there (August)
Take insect repellant and cover up – there are places in Tanna with malaria.
Get a great camera and a tripod to capture pictures like Andrews. I will also put up his GoPro footage once it has been edited.
Wear sneakers or sturdy footwear, it is a rough track and the people in jandals were struggling!
Take a torch and do the twilight tour, the colours at night are amazing!
There is accommodation closer to the mountain – including some really cool looking tree houses! Will try them next time.
Stay an extra day – or more! Our trip felt a bit rushed but we had to get back for the kids.
Take a change of underwear’ because well – it was s*!t scary…