We saw some crazy boating manoeuvres over our summer holidays in the Marlborough Sounds. It seems that many people really have no idea what they are doing when they get behind the wheel of their boat and set out for adventures on the water! However even if you cockily think you are an expert, accidents still happen which can take you and your confidence down a peg or two!

The best place to observe some of these disasters is at the marina or a launching ramp. I highly recommend getting yourselves some takeaways, a chilli bin full of some cold beers and set yourself up on a sunny day either at a launching ramp or a fuel berth at a marina. I can assure you that you will have plenty of entertainment to keep you occupied for many hours. You can quite easily spot the people who know what they are doing from the people who don’t…

How do I know? Well I feel extremely well qualified to write this post as I have looked like an idiot in the marina on more than one occasion, and have observed many other people also making idiots out of themselves too. Let me also tell you that it is much worse when there is an audience watching.

Also a disclaimer – my boat usually lives on a mooring with plenty of wide open space all around her, and now I have a fear of marina’s. My palms are getting sweaty just typing this post…

We were in Waikawa marina – strong northerly blowing which meant we had to reverse out of the marina berth in to the wind. The gap between the marina fingers wasn’t very wide… so I reversed out as far over to the boats on the next finger as I dared, however in between going backwards and then going forwards again, the wind caught our side, I wasn’t going fast enough and we were blown broadside on to the boats and marina poles from where we had just exited… this resulted in Andrew drawing blood on his leg trying to avert disaster, Wildy got a few scratches on her gorgeous new wrap job and I was humiliated and am now allergic to going in and out of marina’s.

Lesson: grow some balls and go a bit faster to get some control in these tight situations. Read up on how to make better use of springs to get us in and out of the berth.

Pacific Seacraft recently posted some cool pics on Facebook of some ways to get in and out of Marina berths and I am going to read up on these! 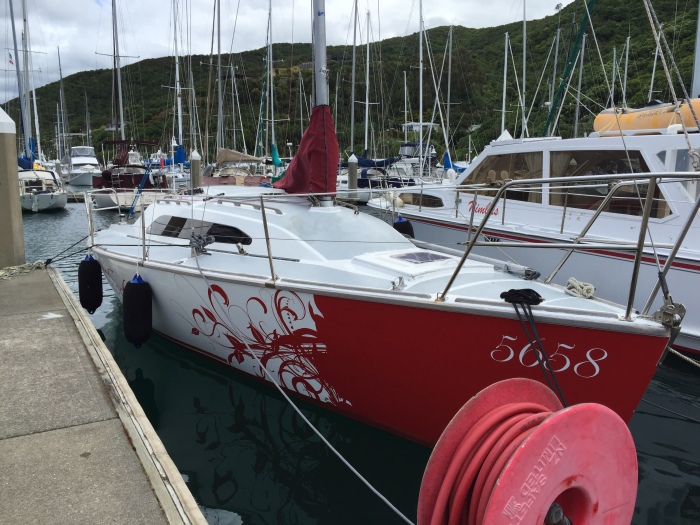 Safe in the marina

Thankfully it wasn’t me being the idiot this time, but this occurred in the same marina the year before. There was a huge storm, and we were well and truly tucked up in the marina waiting it all out. The next thing we saw was a big 45′ yacht come flying in to the marina and was attempting to park in their berth. We were out and jacketed up so ran down to where they were coming in and offered to help “throw us a line!” we hollered over the howling gale. Well they didn’t have any lines attached to throw for us to catch and try to help them in to their berth. Instead the crew stood there watching while they were blown back on to the boat behind and they squashed in to the dinghy hanging on the davits behind and popped it! Wow that was a loud bang and those people looked like real idiots, especially as the dinghy that was popped belonged to the boat behind.

Lesson: Check the forecast! If it is going to be crap and you want to come back to the marina try and do it before it gets to mid storm! Tie lines and fenders on all over the boat to be ready for any scenario that might eventuate when you come in to the marina. You don’t have time to change them over if the plan changes mid way through entry.

Me again… coming in to the jetty at the yacht club to drop some people off and getting stuck on ‘grannies rock’ which is on one side of the floating jetty. This meant that I had to eventually be towed off by a halyard – hauling the boat over to one side and one of the club rescue boats dragging us out. HIGHLY embarrassing and there is photographic evidence of this somewhere and  I hope no one ever tries to blackmail me with it.

Lesson: check the local conditions and the tide before manoeuvring your boat in shallow places!

Over to my ex husband and I this time. We were in his speed boat and launching at the public boat ramp. I jumped in to the boat and once we got in to the water my ex unhooked the boat and unexpectedly it rolled straight back off the trailer  and in to the water before he had a chance to get in. “No problem” he says, “just turn the key, start the engine and come back alongside the jetty and pick me up.”
“Sure that’s fine!” I reply… “where are the keys?”
“Right there in front of your eyes – in the ignition!!”
“Ahhhh no they aren’t!”
A heated debate follows – something along the lines of “use your eyes!!!” and through gritted teeth “THEY AREN’T HERE!!!”
Followed by “where is the paddle?”
Needless to say, there were no keys, and no paddle on board and by the time we had finished our argument I had drifted quite some way off the ramp and had to be towed back in my an amused bystander…

Lesson: Always take the keys, hold on to the boat’s painter when you are launching it and have a paddle on board for such emergencies! 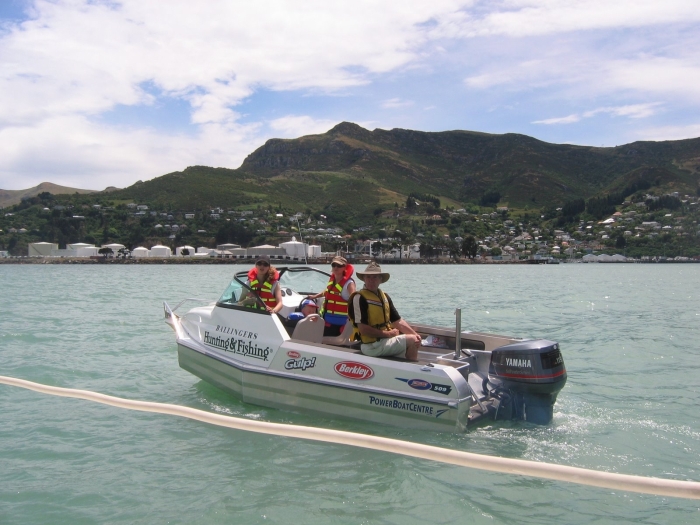 Just me again. Middle of winter – barely above freezing. I am about 8 months pregnant and am going out to check on the boat. I scramble awkwardly in to my dinghy and am about 5 metres from the boat ramp  when the propellor gets wrapped around a fishing net which is somehow attached to the seabed.

Us again but thankfully not the ones looking like dicks this time. Andrew is waiting patiently beside the diesel fuel pump with our 20 litre fuel container, waiting for our turn in line to fill it up to take back to the marina berth (because I am now too frightened to drive anywhere in the marina – let alone to the fuel berth…) our turn comes, and speed boat outboard engine guy gets all snippy… “Hey! you are jumping the queue!”
Andrew looks at him and then at the diesel pump and then back to him again “But….”
“WE WERE HERE FIRST MATE!! WAIT YOUR TURN!” snippy speedboat guy says…
It was at this stage that Andrew felt quite justified stepping aside and very nearly letting this idiot fill his petrol powered outboard up with diesel.

Lesson: There is no cure for real idiots – best to let these ones learn their lesson the hard way.

How many times have you launched your trailer boat at the boat ramp and forgotten to put the bungs in? Well I can assure you that this has happened to me on more than one occasion. Even better though is when you see people trying to launch their boats without having removed the tie downs securing the back of the boat on to the trailer. This one is quite hilarious to watch!

Also people who can’t reverse trailers trying to get in and out of tight spaces.

Marriages are either made or broken at boat ramps…!

Lesson: put the bungs in, take the tie downs off, teach your wife to either drive the boat or reverse the trailer and don’t what ever you do shout at her!

A harmless way to look like an idiot when you have left the marina is to be sailing/motoring along with your fenders still out. We say it is a bit like walking around with your skirt tucked accidentally in your knickers. It doesn’t do any harm, but it just doesn’t look cool…

So there you have it! A confession of sorts of the stupid things I have done, been involved in or witnessed in marina’s. My friend Mark also has some hilarious examples of terrible mistakes people have made on boats, on his blog Cygnus III.

Do you have any good scenario’s to add? Please comment below. I would love to hear that I am not the only one with marinaphobia!