Lyttelton Harbour is surrounded by the Port Hills, which are part of beautiful Banks Peninsula. The whole area is made up of two extinct volcanoes that have been flooded by the sea when they exploded millions of years ago.

High up on the hills is a little track which leads to the Pack Horse Hut. Having lived in the area for many years, I was ashamed to say that I had never been there. Well there was only one way to fix that, so I mustered my friends Naomi and Camilla, we packed our bags and hit the road.

My Mum lives just down the road, so we got her to drop us off at the start of the track in Gebbies Pass. The track is described as easy, so I expected it to be easier than it was… But it is only 4km to the hut so it didn’t take too long to do the walk, firstly through forest and then weaving our way up and around the hillside. 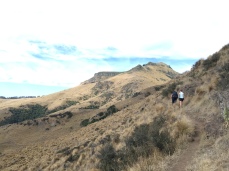 The views back down the beautiful harbour that we love sailing on were just spectacular.

Finally we arrived at the hut.

It was built back in the early 1900’s. Mr Harry Ell planned a series of rest stops for a journey from Christchurch to Akaroa via the summit road (as opposed to the actual current road that skirts around the bottom of the hills) Four huts were built. The Sign of the Takahe, which is on the hills in Cashmere, and was a restaurant until the earthquakes took their toll. The Sign of the Kiwi – which used to be a popular ice cream stop at the top of the hill on the way to Governors Bay. The Sign of the Bellbird, which is further along the Summit Road, and the Sign of the Pack Horse which is accessible only on foot.

They are all built in local quarried volcanic stone. 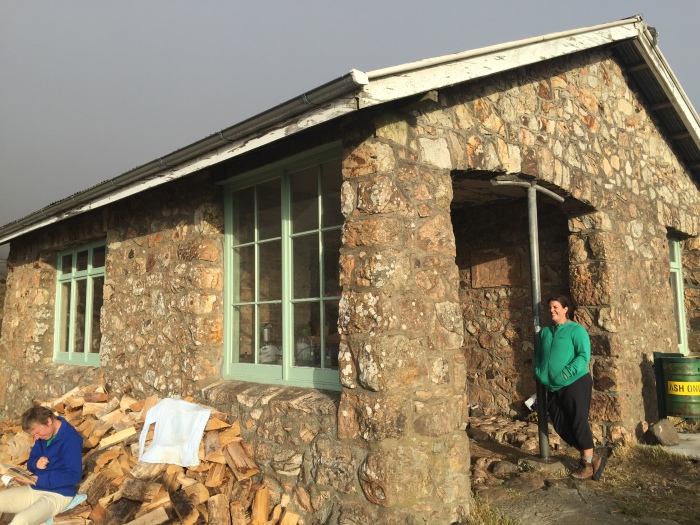 Reaching the hut was a good excuse for a glass of wine to celebrate, along with some gooey cheese to replace all the calories we had burnt off on the walk up.

Camilla had wisely decided to just do a day trip, but Naomi and I were committed. Luckily we had bagsed a bunk – actually a mattress on a platform packed in with everyone else. We got the last one, and so it looked like we were sharing. 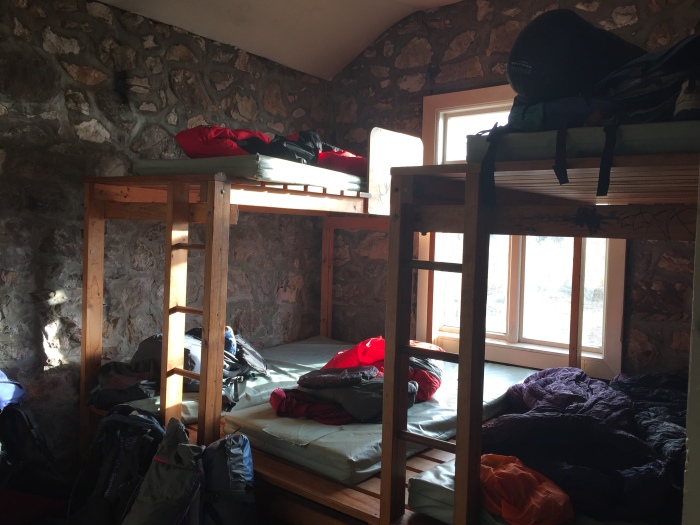 The hut officially has nine bunks. By the time we went to bed, we counted over 30 people in the hut. It was – cosy.

I have done quite a few hikes now, and stayed in lots of different huts. I still think it is quite strange to be sleeping so close to absolute strangers. However the atmosphere is always quite jovial. Everyone else acts like it is all normal and fun, so I just go along with that as well. 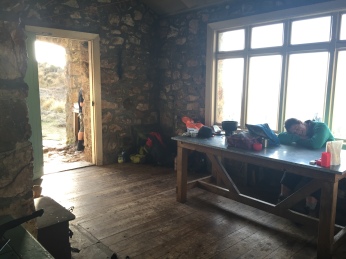 However some people are just a bit strange. Like the guy that turned up wearing a dressy cotton shirt, who pulled his huge lap top out of his bag. He looked like he was going to work. He was with another couple and a younger girl. We couldn’t figure out their relationship to one another, so I had to dare Naomi to ask them. It turns out they were work mates on a pre-wedding walk with one of the adults daughters…

Naomi and I cooked up an amazing rehydrated meal in the jet boil, drank lots more wine, people watched, eaves dropped on conversations and did some sketches in Naomi’s book.

More people turned up and some pitched tents outside. Others started pumping up double airbeds they had brought up with them. Many people were tourists, I think it was just Naomi and I and the laptop people who were locals.

Just recently DOC (Dept of Conservation) has implemented an online hut booking system. This should hopefully avoid all the overcrowding. Refer below.

We eventually drank enough wine to enable us to attempt sleeping on the single mattress. We devised a sort of top & tail strategy which meant our bodies were on the soft bit, but our legs and heads were off the edge. I am not sure if I got any sleep at all, but hey it is all an entertaining experience!

The following morning there appeared to be even more people sleeping all over the floor of the main room. It was a major mission trying to step over them to get out to go to the loo. They had moved all of the furniture in to a huge pile on one side of the room, and most of them looked like they were quite keen to have a sleep in… hmmm…

Eventually they got the hint (it is hard to ignore a girl in socks and jandals walking over you) and they got up and put the furniture back.  Within two minutes my very sexy jet boil had whipped us up a hot cuppa coffee. We were up in drizzly clouds. The stunning view from the day before completely obscured by the damp gloom.

We decided to take the other track home, which took us down to Kaituna Valley. This track was steeper than the one we came up, and we had to walk through paddocks full of big black cows who looked at us intently with their big black eyes and long long eyelashes. I was worried they might chase us – as my pet cows used to do to me. So I was a bit worried, but these ones were quite friendly. 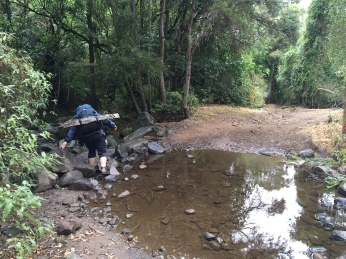 There were a couple of little river crossings as well. And also a marshmallow farm at the bottom of the road. We called Mum when we got to the bottom and she came and picked us up.

We felt like we had been away for ages, but in fact we were away for less than 18 hours! It is a great walk if you want to just go up for a day or a quick overnight getaway from town. Now we can guarantee getting a bed, I will take the kids next time! 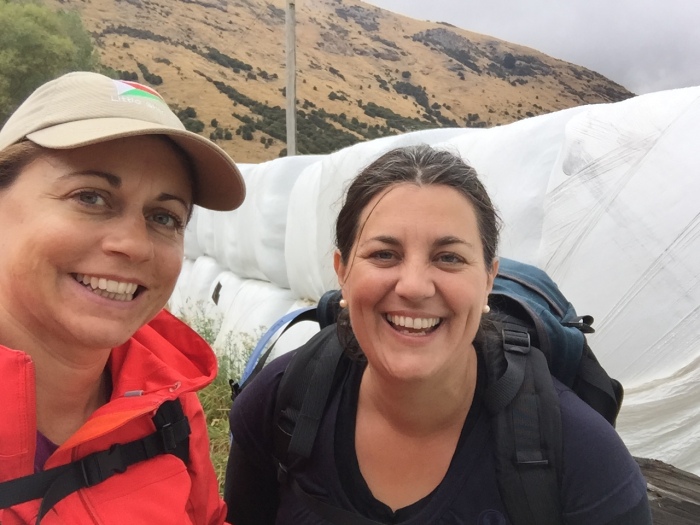 9 thoughts on “The Pack Horse Hut”