The image of a man dressed in a colonial costume standing on a bleak hilltop overlooking a windswept harbour and mountains covered in snow behind caught my eye. The landscape reminded me of Banks Peninsula, but I was to learn later that this picture was taken on the opposite side of the globe. 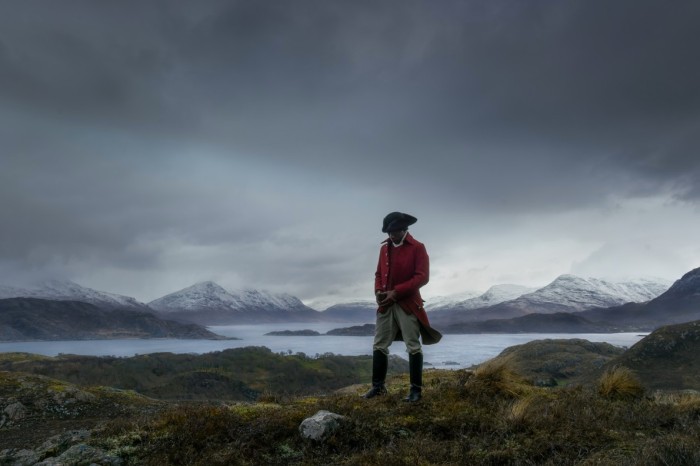 Vertigo Sea was the name of the exhibition, which again triggered more interest. I had to learn more and so on the rainy Sunday, with the weather as bleak as in the picture, I took the family to see this new exhibition at the CoCA Gallery.

We arrived just in time to to quickly examine the huge whale bones on loan from the Canterbury Museum. I remember this whale skeleton hanging from the ceiling in the Museum, it is apparently the largest blue whale skeleton in the world, but then it was time to be ushered in to the dark room. We sat down on the middle seat, and we were the only people there on this cold Sunday morning.

Three huge screens filled the wall in front of us, Vertigo Sea was about to begin. Each screen showed a different picture, it was hard to know which way to look, accompanied by haunting music and the occasional narrative – quotes mainly, the result was a sensory overload.

Stunning footage on one screen showed seaweed swirling in the swell, on another hundreds of beautiful seabirds were diving in to the water, while on the third screen a man in period costume stood knee deep in water in the rain with an old style pram in the foreground and a clock was ticking…

Each screen moved quickly from one scene to another. One minute we saw stunning icebergs and then a mother polar bear being shot while her two cubs looked helplessly on. One screen showed huge breaking waves, a surfer’s silhouette carving through the barrel, while the other screen showed a ship carrying African slaves being pushed over the side and in to the ocean to drown. A further image showed their bodies washed up on the beach.

And then the clocks, ticking along with the images of colonial people standing still on a windswept landscape with broken furniture, a solitary golliwog doll, the pram and a dead deer hanging by its feet.

The cinematography was stunning, new footage combined with historical clips. We saw spectacular images of whales breaching followed by their slaughter, being dragged up the back of a ship and sliced apart, a blood red ocean.

Each screen seemed to be filled with different images, one of incredible beauty, one of horror of how humans treat one another and the ocean and one that found me wondering at the significance of its inclusion – the clocks for example. It kept me enthralled, repulsed and questioning all at the same time.

It lasted for about 40 minutes. The kids stayed captivated throughout. When it ended we asked them what they thought. “It was disgusting!” said Seth. The challenging images of the slaughter of the whales and polar bears, and the bodies of the slaves washed up on the beach, had clearly made their impact on him.

Agreed. It wasn’t easy to watch, but then I am sure that is what the artist intended. This is not your usual natural history documentary, nor is it just stunning landscape photography with unusual characters and props – the clocks. It is a collection of powerful images designed to evoke a reaction. ‘Confronting’ – absolutely, ‘disgusting’ – definitely some of the images were. ‘Beautiful’ is one word that I would add. The Ocean and its diversity of life is incredibly beautiful and this movie captivates many of those images. Those will be the ones that I will try to remember.

It also linked in quite nicely with the Ocean course I am doing at the moment.

For a taste of the first few minutes of the movie you can watch here. Vertigo Sea is a travelling exhibition and currently on display at CoCA in Christchurch until 7th August. Entry is free.