We jumped on the Shinkansen again to Hiroshima, just a couple of hours from Kyoto. This time we managed to reserve specific seat numbers on the reserved carriages. The countryside quickly whizzed past and we pulled in to the station just after lunch time. We were a bit more prepared this time and had bought Obento boxes – a traditional Japanese lunchbox, with a variety of unknown but quite tasty things for about ¥1000 each (approx $12 ish).

Hotel Flex
We had booked another hotel close to the station and so we just had to work out which was the best station exit to take to get us there. Once again it paid to have a bit of internet data to enable us to use google maps to get us there. Just a few hundred metres from the station and overlooking one of the many rivers in Hiroshima, the Hotel Flex was a great spot and it had a lovely restaurant/bar opening out to the pavement. It would be a lovely spot to sit in summer and watch the world go by.

Once again the rooms were quite small, with only enough room to walk around one side of the bed and a small space on the floor for your bags,  but that was all we needed and the price was only $120 ish a night which also included a delicious light breakfast.

Transport in Hiroshima
We worked out that our JR rail pass worked on the local sightseeing loop bus, so we used that to get from the station out to the Memorial Peace Park and museum. There is also a local tram system that costs about ¥160 per sector (about NZD$2.00) and a JR line that went further out to the suburbs. With the city being relatively compact it isn’t very expensive to take a taxi so we did that a few times as well.

Hiroshima Peace Park and Museum
We took the sightseeing bus to the door of the museum and bought a ticket – about ¥200 per person to get in. They were undergoing major renovations, so not all the exhibits were available and the bit we got to see was quite cramped with lots of people. What we saw was extremely graphic and deeply distressing. Details on how the bomb was developed and dropped, photographs of the burnt and injured, items of clothing and melted bottles and roof tiles, pictures of the destruction, and analysis of the ongoing after effects on the survivors.

We signed a petition asking for the destruction of all nuclear weapons. I felt very sad when we exited the building. Such a waste of life.

The beautiful park is a memorial to those who lost their lives and as a symbol of peace. There is a beautiful water feature, flowers and a flame burning. We walked through the park and down to the A Bomb dome. This building was one of a handful of structures that was left partially standing when the rest of the city was completely annihilated.

Before you travel, I really recommend reading a book about Hiroshima to get a better understanding of what went on here, and can recommend this one on the attached link which is about a 15 year old boy who died just after the bombing.

Okonimiyaki
We jumped back on the sightseeing bus and headed towards the central city which was buzzing with people and brightly lit shops. We were heading to Okonomiyaki-Mura which is a four story building housing about 20 different little restaurants – all serving just one dish. Okonimiyaki is a local speciality and the Hiroshima variety is a bit different to the kind I had tried before in Osaka. It is basically a pancake cooked on a teppanyaki bar. The pancake is on one side and it is filled with shredded cabbage, beansprouts and meat like bacon, shrimps, cheese etc. Then there is another pancake on the top made out of a cracked egg that is flattened out to a pancake shape. Add special okonimiyaki brown sauce and some mayonnaise to the top and a handful of finely sliced spring onions and serve with a special little spatula to cut it up. Delicious! It was so good in fact we came back again the next night for another serving.

Miyajima Island
The following day we headed back to the Peace Park and jumped on a high speed ferry down the river and out to Miyajima Island. It cost ¥2000 – approx NZD$25 ish per person for a one way ticket and took about 40 minutes. We planned to take the JR ferry and train back in the afternoon (for free with our rail passes).

It was super busy when we got there with the streets lined with tourists all heading to the temple (which is what Japanese people do on the days following new year).

We wandered along the waterfront with its golden sandy beach and patted some of the tame deer. We had been warned that these deer have a particular taste for JR rail passes, so we kept them well secured in our bags.

The island is most famous for its huge orange tori gate which is located out in the water and appears to be floating. It is said to be one of Japan’s most scenic spots. Try to aim to visit at high tide, as at low tide the tori gate is high and dry. 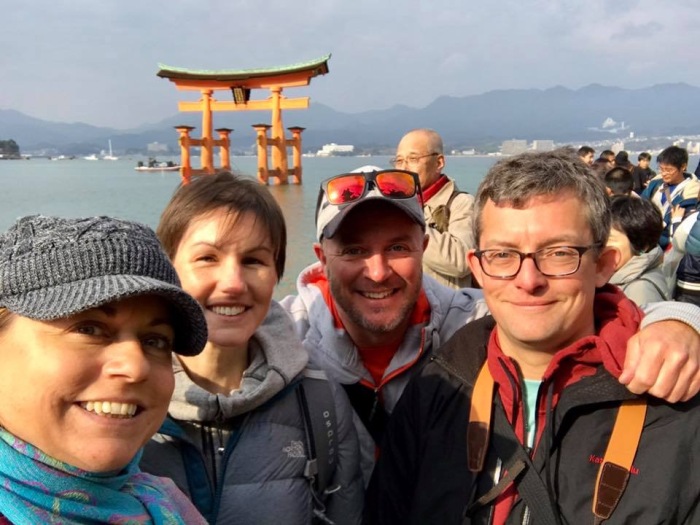 We were keen to escape the crowds, so we ducked down a back street and made our way to the ‘rope way’ to take us up the mountain (¥1000 per person one way) The views were spectacular and there was no wind at the top as we looked out to the inland sea and all its various islands. It looks like some great cruising grounds, but we only saw a couple of very weedy looking boats sitting in the bay. 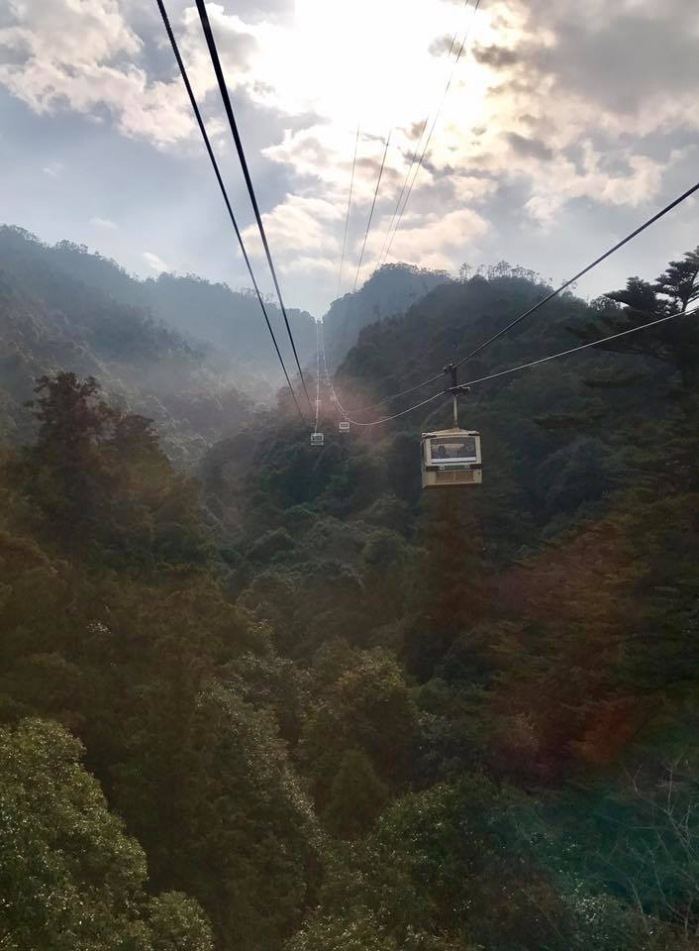 We had decided to walk back down the mountain to stretch our legs but we weren’t entirely sure how long that was going to take. The area is dotted with shrines through the forest and we stopped at one which had a flame that had been burning for over 1200 years! Signs warned us about poisonous snakes, but thankfully we didn’t see any. It was a lovely walk which took a couple of hours and we were greeted with a friendly “Konnichi wa!” from fellow hikers passing us on their way up. I guess hikers are the same all over the world? 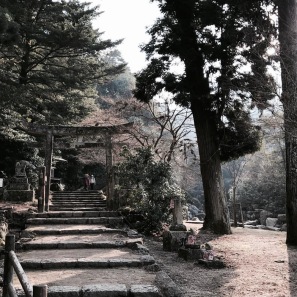 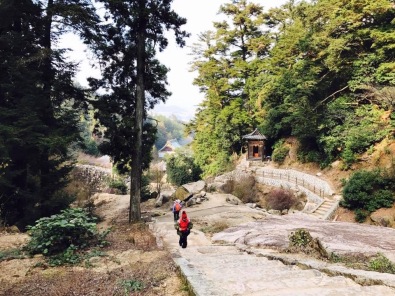 I personally was pretty happy to have bought a pair of Allbird sneakers especially for this trip. I seem to always get blisters and have sore feet with any pair of shoes I buy, however these would have to be the most comfortable shoes I have ever worn. They are super light, made out of wool and have a light but supportive sole. I can highly recommend them for a good travelling shoe, as we had definitely been doing a LOT of walking. 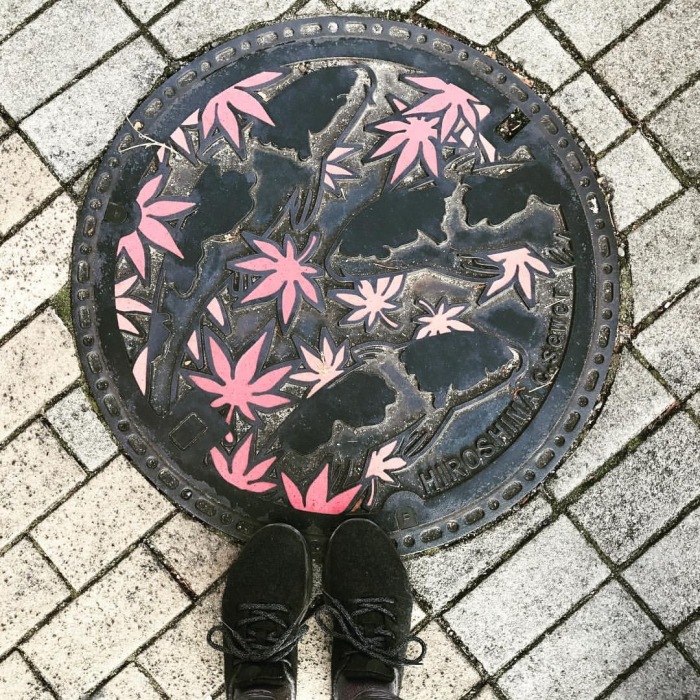 Another thing to keep an eye out for as you travel around Japan are the drain covers. It seems that there is a bit of a competition between different councils as to who has the most decorative drain covers. This one pictured above was my favourite so far and featured the maple shaped leaf which seemed to be the emblem of the Hiroshima/Miyajima area.

Speaking of public services, we were really surprised at how clean and tidy everything is. The trains and stations, streets and absolutely spotless. Not a scrap of litter or any graffiti anywhere we have been, it’s fantastic!

Miyajima is a lovely place to visit and is apparently even nicer in the evening once all the day trippers head home. If you had some more time I would totally recommend staying a night out here and doing some more of the walking trails.

We jumped on the JR ferry and the the very full JR train to make the most of our rail pass to get back to town. Hiroshima is a lovely city with plenty of shopping and nightlife. Very compact and easy to get around. Once again it was somewhere we could have easily stayed a few more days, but we had more adventures ahead…

Come skiing with us in Hokkaido

Or head back to Kyoto

Convert this article in to a self guided tour via the GPS My City App.