“Believe me, my young friend, there is nothing — absolutely nothing — half so much worth doing as simply messing about in boats.”

“In or out of ’em it doesn’t matter. Nothing seems to matter, that’s the charm of it. Whether you get away, or whether you don’t; whether you arrive at your destination or whether you reach somewhere else, or whether you never get anywhere at all, you’re always busy, and you never do anything in particular; and when you’ve done it there’s always something else to do, and you can do it if you like, but you’d much better not.”

Ratty from the Wind in the Willows was certainly right about that. There is absolutely nothing better than messing about in boats, and so that’s what we decided to do.

A long weekend is always a perfect excuse for an adventure. Even better a long weekend with an amazing weather forecast. The peninsula beckoned. Seth and I packed up Wildwood on Friday evening and we headed across the harbour to Diamond Harbour.

We picked up the club mooring and were joined by our friends Craig, Nicci & Logan on Flying Machine. We rafted the boats up together, and took the dinghies to shore where we met our friends Nicola and Pete who had come across on the ferry.

A short walk up the hill is a cafe called Preserved. There are also a couple of other little bars up there. We enjoyed a fantastic meal and solved all the problems of the world over a few glasses of wine before heading back to the boats and off to bed.

The Diamond Harbour wharf is a popular spot for fishing, but we never see anyone catch anything large enough to eat. For some reason there were people still fishing at about 3am when I woke up and poked my head outside. Strange…

Anyway the next day was hot and sunny and no wind, so after breakfast we fired up the motor and out to the heads. We are usually surrounded in dolphins, but today there weren’t many around and they weren’t interested in swimming with the boat. As per almost always, we had the entire beautiful harbour to ourselves, and we wondered what anyone else with boats could possibly be doing on such a stunning day! We carried on beyond the heads and around to a little bay with a huge sea cave. 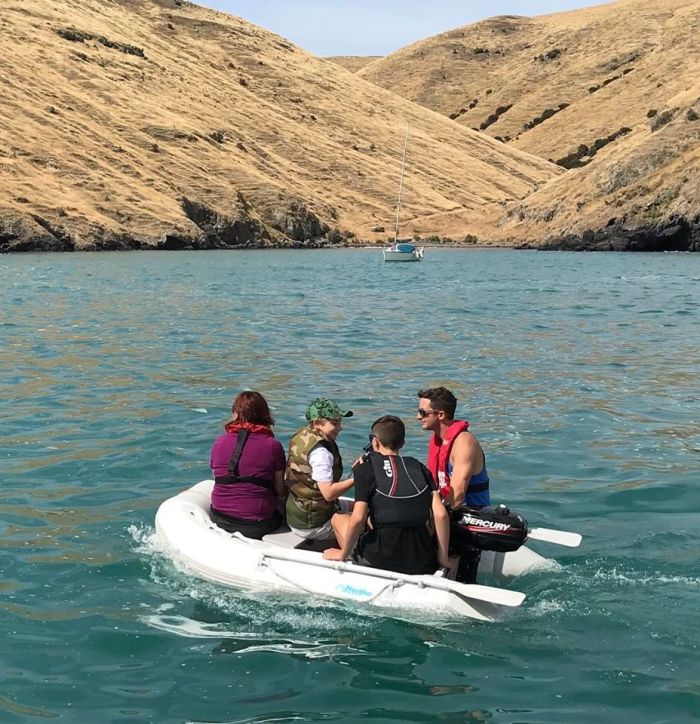 It is difficult to see the cave until you are right on top of it. Flying Machine dropped their anchor and came over to pick up Seth while Wildy and I wallowed around in the swell. The cave has a small entrance on the side and a large entrance at the front. They motored through the entry in their dinghy and explored inside.

Then we turned back around and went in to Port Levy. The club mooring is tucked around the corner out of the wind and swell. We once again rafted up and were soon joined by our friends James and Elisa on their speed boat called ‘Boat’.

We were joined by a couple of other yachts, but mostly the bay was completely empty. Not many places in the world that you can do this without being surrounded by hundreds of other people. Shhhhh don’t tell anyone!

We spent the afternoon just mucking about in boats. James & Elisa had a waterski, Seth and Logan went swimming and on a dinghy trip to explore an island, Craig & Nicci went ashore for a walk and I didn’t do very much at all. It was great. 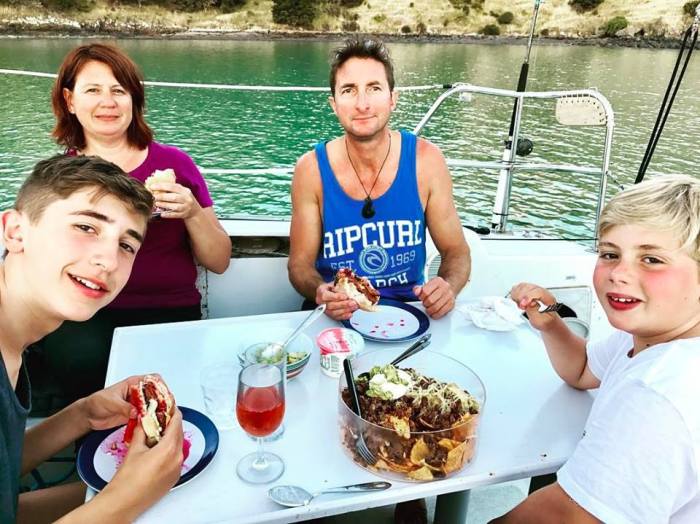 We did a man overboard winching out of the water drill, cooked a huge dinner and then played a game called Articulate. Lots of fun.

The next day we all slept in. As I was finishing cooking breakfast I saw a little inflatable dinghy speeding around the corner – it was Andrew on Puff! He hadn’t been able to resist coming out for a day on the water instead of staying home and packing up his house to move in a couple of weeks. It was great to see him and it sounded like it had been a long trip in the little boat over some big swells at the heads, but he was surprisingly dry. We spent the day mucking around again. Andrew towing the kids around behind the boat, James & Elisa came back with Elisa’s parents who managed to catch a big stingray on the fishing rod. Some other sailors joined us on the mooring, we all had swims – even me! 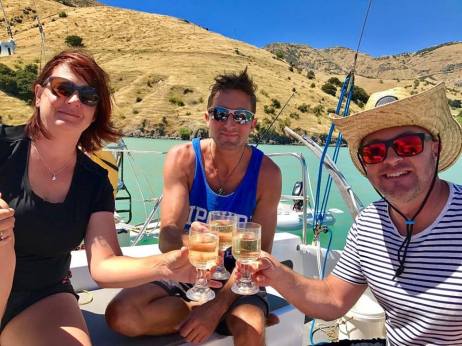 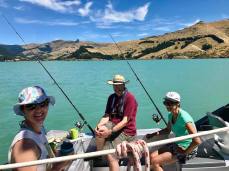 After a fabulous day we decided to head back closer to home, so we packed up and motored back to Diamond Harbour. It was a pretty good sailing breeze but we were all feeling a bit too relaxed and lazy to get all the sails up.

We picked up the club mooring and had another amazing meal. There wasn’t a breath of wind all night. The late night wharf fisher people were still there, not catching anything when I got up in the night.

Andrew left early to get back to house packing duties, and then Flying Machine were off too. Seth and I stuck around for some breakfast then headed back across the harbour and watched Kilcullen Voyager get lifted on to a ship. There is now another Vendee Globe boat in the port owned by Frenchman Thomas Ruyant. This one has a mast, but its hull was damaged when he hit an object about 400 miles south of NZ just before Xmas. It has been patched up. I’ll see if I can figure out what is going on with that one!

We were home around lunch time Monday – Waitangi Day here in New Zealand. A day to commemorate the signing of the Treaty of Waitangi, or New Zealand’s founding document. It is weekends like this – simply being out on the water mucking around with friends -that makes me feel so very proud and privileged to be a New Zealander.

3 thoughts on “Messing about in boats”