A flotilla of leaves floats downstream

On the inky black water of the Otakaro

How serenely they sail out of the past

And in to their future

If you substitute the word ‘leaves’ in the top line for ‘sailors’ then this poem would quite succinctly sum up our day on the river. Exploring the city of Christchurch New Zealand from a fresh perspective, by water, afloat – our favourite mode of transport.

The Avon River – Otakaro, begins as a bubbling spring in the North West of the city in a suburb aptly named Avonhead. From there it winds its way quietly through leafy neighbourhoods, slowly growing from a creek, to a stream, collecting various other tributaries along the way, until it becomes an almost navigable river in a garden called Mona Vale. Then it slowly zigzags it way through Hagley Park, and meandering through the city centre and then out through the earthquake ravaged Eastern Suburbs, in to the Estuary and finally out in to the Pacific Ocean. 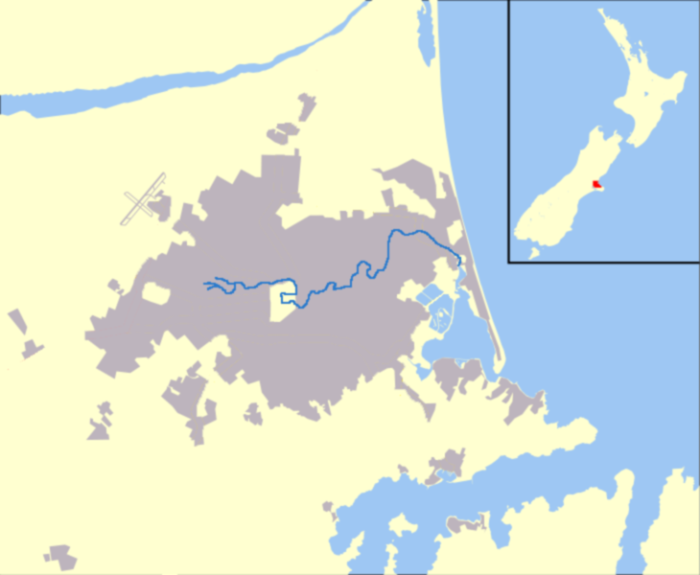 For me it all started a few years ago when my famous dinghy was borrowed by a television production company who were doing a TV show on the history of the Avon river. They started in the Estuary and headed upstream, sowing a seed in my mind of a similar voyage. I discussed it with friends and they were keen to come too. A summer went past and the weekends slipped away, but finally we set a date and a plan.

Over a few glasses of wine one evening we plotted the places we wanted to visit and for reasons I fail to remember we also decided to get dressed up in fancy attire for the voyage. We rushed off to the Op-Shop to buy sparkly dresses and hats suitable for such an auspicious occasion.

We decided to start our adventure at Mona Vale Homestead. Built in 1899 and recently reopened after being badly damaged in the 2010 & 2011 earthquakes, it has now been fully restored to her former grand stately self. Manicured lawns taper down to the waters edge.

We pulled up the driveway at 8.15am and started unloading paddle boards and dinghies. A few technical issues arose when my paddle didn’t want to slot together and the valve on my SUP wouldn’t seal. Despite a number of attempts to repair it, we finally admitted defeat and Craig kindly agreed to let me travel in the dinghy with him.

Thankfully the lovely staff at Mona Vale had a fabulous champagne breakfast all ready for us,  I soon got over my SUP disappointment, and the cloudy skies cleared to a sunny day.

We launched our various watercraft – Stand Up Paddleboards (SUP) kayaks, and dinghies and headed off serenely downstream. We made it about 20 metres before we hit the bottom and got stuck… Elisa scratched the bottom of her brand new paddle board, we narrowly avoided having to get out and drag the dinghy over the stones. Finally we found some deeper water and managed to get going again.

But the serenity was short-lived and about another 20 metres further on we came across a huge waterfall! (Well a weir, but I’m not one to let minor details get in the way of a good story.)

Some of the braver members of the party were keen to have a crack at going over the waterfall, but I wasn’t that keen on breaking my neck and getting soaking wet so early in the day, and I managed to talk Craig in to hauling the dinghy out and walking around the edge and down the steps instead. 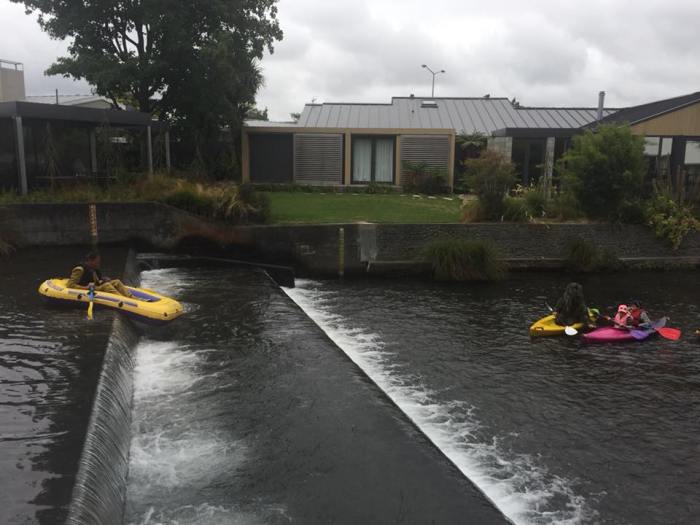 Finally after those initial obstacles we reached a wider and deeper part of the river. A few small rapids added to the excitement as we mellowly made our way down stream, floating through people’s back gardens, under busy road bridges and heading deeper in to the city. 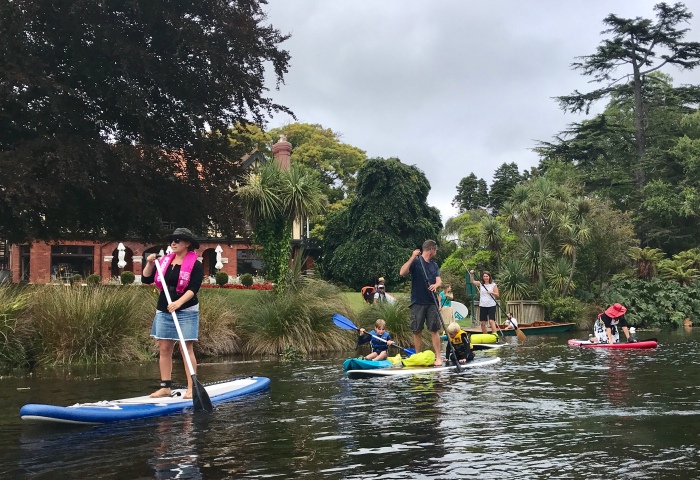 The river winds its way around North Hagley Park and in to the beautiful Botanical Gardens. Locals and tourists alike were out enjoying the lovely day and we got lots of strange looks as we floated past in all our finery. Vaughan had his UeBoom on board his blow up boat and played a lovely version of “Row Row Row your Boat” as we paddled past.

It was at sometime in this stretch of the river that we had a few casualties – with both Naomi and Nicci falling off their paddle boards and in to the water. When poor Naomi fell off she was completely submerged much to the horror of the tourists going past on a tranquil punt ride. Frankly I didn’t realise the river was that deep that it went right over her head!

If you haven’t got your own SUP, dinghy or kayak, you can either be taken for a punt ride or hire a kayak or rowboat from the Antigua Boatsheds and explore this part of river at your own pace.

We were getting a bit thirsty at this stage, so we stopped at the Boat shed cafe for some rehydration with another glass of bubbles. Some of the team had to head off to other engagements so they caught an Uber from there back to their cars at Mona Vale.

The rest of us paddled onwards…

Past the stunning earthquake memorial. A quiet place of reflection in honour of the 185 people who lost their lives on the 22nd February 2011.

Under the Bridge of Remembrance – built in honour of fallen soldiers.

And then on to Oxford Terrace – or what locals call “The Strip” which is also undergoing a big makeover, including some steps inscribed with the poem from the beginning of this post, but also some Eel hotels…

Eels are incredible creatures. If you don’t know much about them then you should do some research. Anyway a couple of facts – 1. they like living in their specially made hotels under the steps and 2. they like eating mince.

Luckily I had bought some mince with me! So we stopped and gave them some lunch.

We were tempted to stop here and enjoy some of the new hospitality establishments along this part of the river, but we’d only just stopped for drinks at the boat sheds a few minutes earlier, so we agreed to press on.

There are some interesting parts of the river here. With pieces of art standing in the middle of the river, lots of bridges to go under and little islands to negotiate, we paddled through Victoria Square, past the Town Hall which is still being repaired, past the fire station with its twisted metal memorial structure from the World Trade Centre, past the incredible Margaret Mahy Playground and then finally in to “The Red Zone” – an area where the land was so badly damaged and unstable following the 2011 earthquake that all the buildings have been demolished and turned in to a kind of eerie parkland. 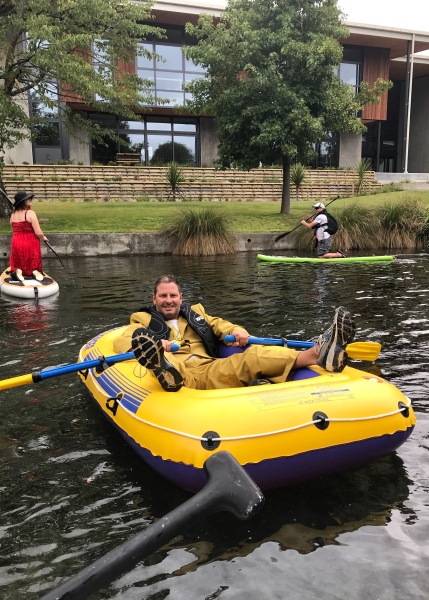 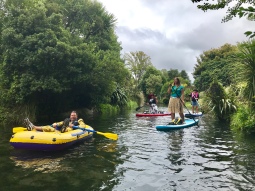 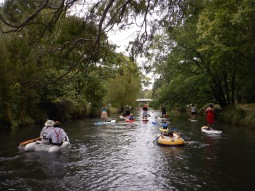 Eventually we emerged again in to civilisation in the form of a bar called Little Poms. It was time for some more refreshments and lunch didn’t disappoint.

Seth, Naomi and Kinga left us after lunch – and the rest of us paddled onwards. Keen to get to the sea!

However the river had other ideas. The flow that had assisted us so far downstream seemed to slow to a halt – possibly due to a still incoming tide and a stiff Easterly breeze picked up on the nose which made the going tough.

We paddled hard until our arms just about fell off. Thankfully Vaughan had the forethought to buy some cold beers, so we had the perfect excuse for our favourite activity on the water – a raft up! 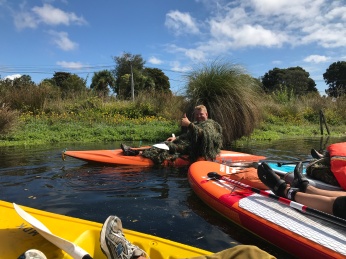 We had no idea where we were – right in the heart of the Red Zone. It didn’t feel like Christchurch, we could have been in the middle of some other country for all we knew. No houses, no cars, only the occasional person walking a dog and one or two other paddlers heading seriously in the other direction.

Thank goodness for Google maps. We needed to find a road so we could get an Uber to come pick us up, and the map showed the Kerrs Reach Rowing Club on the map a kilometre or two up ahead.

We paddled on past flocks of ducks and swans, past thick reeds and grassy tree lined banks, round corners and finally we made it!

We dragged our boats up the bank and called an Uber for the drivers to head back to Mona Vale to collect the cars while the others stayed behind with the boats.

It was about 4pm – we’d started at 9.30am with a couple of stops on the way, and we hadn’t even made it all the way to the Estuary! As we drove back to the beginning I realised just how much territory we had covered.

While we hadn’t quite made it all the way to the end, we’d had an amazing day with wonderful friends, and had seen our city from a new perspective.

Thanks to James Jackson and Naomi Wilde for some of their photos used in this post.

2 thoughts on “An Avon Adventure”