Crossing the Auckland Harbour bridge in our taxi, seeing the ocean glittering below and the horizon pierced by hundreds of masts escaping the confines of their berths and heading out to sea for an Easter adventure. It is easy to see why Auckland has the nick-name “City of Sails”, and we were about to join them. If we could ever get out of the terrible traffic jam…!

After what seemed like an eternity we finally arrived at the Charterlink base in Bayswater Marina. Vic had the foresight to order our provisions online at the Countdown supermarket at the airport, so our mini-van taxi was jam-packed full of people, gear, food and wine. We were all set for a fabulous weekend.

Bella Rosa a 46′ Bavaria was waiting patiently in her berth for our arrival. With three double cabins and one bunk room, there was plenty of space for all eight of us. Peter from Charterlink gave us a thorough briefing and then we were off, slowly navigating out of the Marina, down the channel and out in to the Hauraki Gulf.

Our friends Dave & Danielle had moved from Christchurch to Waiheke Island a few years ago, so they’d been advising us on potential anchorages for the first night. We needed to find a suitable anchorage before dark – so we unfurled the sails and set a course for Motuihe Island.

The forecast was for a light SW breeze and so we tucked around the Eastern side of the Island out of the wind and swell, dropped the anchor and cracked open a beer.

We’d divvied up the cooking duties, with a different group responsible for preparing dinner each night. Emma and Gavin were up first and impressed us all with home made basil pesto and chicken pasta. Delicious!

I poked my head up a couple of times during the night to make sure we were still in the same spot. Occasionally Bella Rosa turned side on to the slight swell and there was a bottle of some kind annoyingly rolling ‘clonk-clonk’ somewhere on the boat that I couldn’t trace in the dark.

With a fantastic forecast and the sun shining through the hatches, we were up early and set a course for Kawau Island – about 20 nautical miles to the North. We unfurled the sails and had our breakfast as we sailed along.

Bella Rosa is a lovely yacht and sailed along really nicely. The sun was out and as we were making such good time we decided to anchor up at Tiritiri Matangi Island for some fishing and a walk ashore.

Getting ashore was a bit of an adventure with a rocky shoreline and the occasional huge wake from crazy launches zooming past. We eventually managed to surf in on a wave and haul the dinghy high up the beach. Tiritiri Matangi is a bird reserve and all unwanted predators such as rats, possums and stoats have been eradicated. The bush has regenerated and created a wonderful haven for native birds.

New Zealand native birds have the most beautiful song. We climbed up the steep hill and in to the bush and we were immediately surrounded by their musical voices singing to one another. Then the heavens opened and it absolutely poured with rain for about 10 minutes. We pulled on our jackets and walked onwards towards the lighthouse and then back to the boat for some lunch.

There are lots of tracks on the island and if you haven’t got your own boat, you can catch a ferry out there to go and explore.

The tide had gone out, leaving our dinghy well and truely up the rocky beach, which made relaunching quite difficult and Emma’s camera went for a bit of a swim in the process. We made it back to the boat where the fishing hadn’t gone particularly well either, so we upped anchor and headed for Kawau to catch up with our friends Jenny and Shadow.

It was Vic and Naomi’s turn for dinner, so they set to work in the galley waiting on us hand and foot in their matching aprons while the rest of us enjoyed relaxing and admiring the peaceful surroundings of Kawau Island. There were heaps of boats in the bay, and when we found a suitable spot with what we thought would be just enough space, we were quite surprised when two more boats anchored in between us and the point! Us South Islanders just aren’t used to having so many other people out on the water. It was all good though and a lovely quiet night.

There was a Kawau Boating Club regatta on the Saturday which would have been fun to participate in, but we had lots of other activities on the agenda, including exploring Mansion House. We did pull up to the jetty to fill up our water tanks ($5.00 to do this – but comes with a friendly helper to assist with tying up) the Boating Club looked like a fabulous spot to spend some time.

On the other side of the bay, Mansion House is an impressive building. It was the residence of Governor Grey in the 1860’s. It has been extensively refurbished and you can visit for $4 per adult and $2 per child. Grey planted the area with exotic trees and also imported all sorts of animals including monkeys, zebras and wallabies.

We all had a look around the impressive building and had a walk around some of the tracks and a cup of coffee and a scone with jam and cream at the cafe. 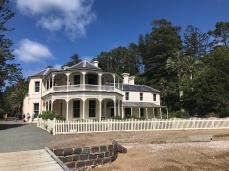 Then it was back to the boat for a swim, and some more sailing and fishing. Emma caught an impressive Kahawai, and we got one size snapper too. I didn’t have any luck at all!

We’d had some refrigeration issues on the boat, and it was decided that perhaps Seth and I should cook our chicken dish a day earlier than planned, so we set to work in the kitchen doing our best to impress our friends with our culinary skills!

Easter Sunday arrived and thankfully Easter Bunny had managed to find us on board with little chocolate rabbits sitting on the table when we awoke. It was time to start heading back towards Auckland, so we once again unfurled the sails and headed for Waiheke Island.

Bella Rosa had a good breeze on the beam and she trucked along at up to 9.3kts. We had a great sail and made good time, so we stopped off at a collection of rocks called The Noises for some more fishing. The boats all around us seemed to be having more luck than us. I didn’t even get a single bite! Eventually we gave up and headed for Oneroa – a lovely bay on Waiheke Island. Once again packed with boats, but we found a lovely spot to drop the pick.

Andrew & Camilla were on cooking duties. Seth and I lazed around reading books and Vic, Naomi, Emma & Gavin headed ashore for a walk and explore.

Waiheke is a great place. We came here last year on another charter yacht called Tangaroa and visited some of the wineries. We’d also been and stayed in a B&B and on my friend Emily’s yacht Honey. There are regular ferries to the island from Auckland and many people – including Dave & Danielle who commute from the island in to the city every day to work. Fabulous! 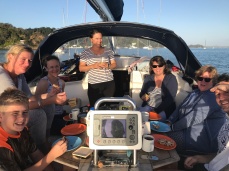 Camilla and Andrew cooked up another fabulous dinner and we watched the sun go down and the full moon rise concluding another wonderful day on the water.

I am not sure that any of us were really ready to go home, but it was Easter Monday and that marked the end of the trip. We departed Oneroa reasonably early and set a course for Rangitoto Island. It was a lovely day for a sail and with light winds we slowly drifted along before dropping anchor in the bay between Rangitoto and Motutapu Islands.

Rangitoto is a volcano which rose from the sea just 600 years ago. It is also pest free and a fabulous reserve covered in sharp volcanic rock. We headed ashore to explore.

There are lots of great tracks you can take to explore the island and even a few little old historic holiday houses on the island.

Sadly we were running out of time, so after a quick bite of lunch we set sail back towards Auckland. Us and about a thousand other boats – all at the same time. Well thats what it felt like anyway.

We just aren’t used to having so many boats in such close proximity. Especially the big arrogant launches flying past about 20 metres away doing well over 20 kts and kicking up a huge wake. Do these people actually realise how much carnage their wakes cause I wonder? I was very surprised to see someone in a small dinghy rowing across the channel with hundreds of boats zooming towards him. I couldn’t believe that he made it through without being run over!

Anyway we made it safely back to Bayswater Marina. Peter from Charterlink was there to help us refuel and we happily handed the wheel over to him to park beautiful Bella Rosa back in her spot in the marina.

Ahhh what an amazing weekend! The Hauraki Gulf has got so many amazing anchorages to explore, and plenty of options depending on the weather. We will definitely be back again sometime to explore some more.

Check out Seth’s video of the weekend:

5 thoughts on “Sailing The Hauraki Gulf”