In hindsight it probably wasn’t the best idea to shout down the aisle of a Bombardier Q300 plane that was about to start taxiing towards the runway “Naomi!! The propeller has fallen off!!!”

The other passengers looked quite alarmed and started quickly peering their pale faces out the windows of the tiny plane to try and work out what on earth was going on.

Naomi – my trusty Executive Assistant, sitting in row 7D, probably didn’t help matters when she shouted back “Shit! Do you think we should try and get off??!!”

This did nothing to relieve the panicked expressions of our fellow passengers faces. Unfortunately they didn’t realise that we were talking about the latest drama in our Round North Island 2020 race shore crew escapades…

You’ll remember from my last post when we hit a sun fish or a whale or something, lost the rudder, found it again, got rescued, hauled the boat out, put it back in the water, sailed it up the coast, almost got abducted by aliens, anchored in the dark, bumped in to another boat, re-anchored and then set the sailors off again to race in Leg 2 of the Round North Island Yacht Race.

Since then, Vic & Emily sat for about 3 days in the middle of a huge high which had very inconveniently decided to park itself up off the West Coast of the North Island. After bobbing about for what must have felt like forever they finally got some breeze, got a bit of a thrashing in Cook Strait and eventually made it in to Wellington Harbour about 10.13pm on Saturday night.

In the mean time, the crew had driven back to Auckland, flown home to Christchurch, done some work, nearly missed a flight back to Wellington, propped up the bar at the yacht club, helped tie up some boats, went to a Mad Hatters Tea Party, and then finally we were on duty – High Voltage was in the Harbour and on the way to the finish line!

Naomi, Nicci & Vonda went out in the welcoming boat to the heads to cheer them along. Willie and I went out on another boat to jump on board after they crossed the finish line to help de-rig the boat and get them parked up. The motor had started overheating when they were doing a battery charge up on the way in the harbour so we got a tow in to the marina, and thankfully with very little breeze we were able to coast in to our marina berth to a huge crowd of friends and family who were waiting on shore to greet Vic & Emily with pizza and champagne. 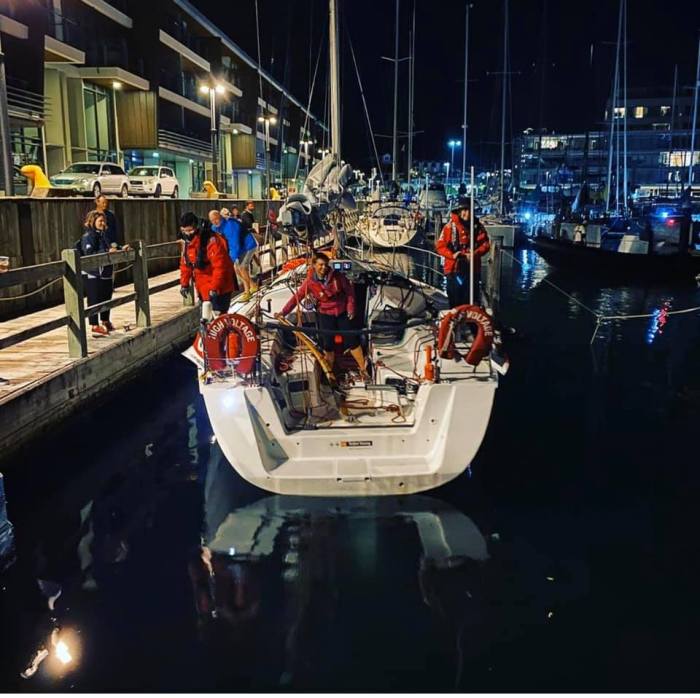 Sunday was filled with sorting the list of jobs. Sails to be repaired, vang to be fixed, fuel & water to be filled, clothes washed, bilges cleaned, decks scrubbed, engine overheating issue resolved, Willie brought all his tools along and he fixed some electrical bits too. We were all doing so well, and we even had time to go to the club for a burger and the prize giving. 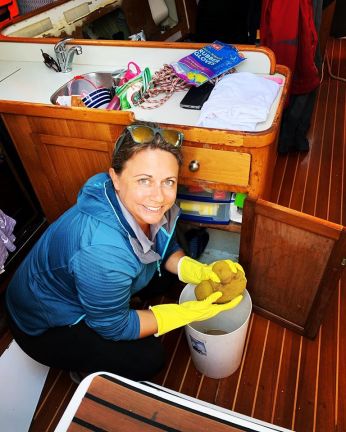 Monday morning was spent sorting a couple of final bits & bobs. The start had been delayed until the afternoon, and Naomi and I had an earlier flight booked to the next stop – Napier. Vic’s partner Johnny had driven all the way from Queenstown to Christchurch – arriving at 4am and then booking himself a $700 flight up to Wellington just for the day to wave Vic off – which we all thought was very kind but probably a bit extreme for just a few hours. We’d even managed to get the crew on to the lovely Fletcher from Blink‘s boat to go out and watch the start.

Knowing the team were in good hands, at just after 12 midday Naomi and I jumped in to an Uber and headed for the airport. Juliet, Willie, Vonda and Johnny were on hand to cast the girls off around 1pm with plenty of time for some faffing about before the 2.30pm start.

However just as the door was closing on the plane, I had a phone call from Juliet – “We’ve got a problem… the propeller has fallen off the boat!!!”.

And that’s when I yelled down the plane to Naomi.

I think perhaps that once you put on your High Voltage shore crew T shirt that you maybe change in to some kind of boating superhero. Because that is absolutely what happened. Well it was either that or the lucky red undies that Johnny had on.

At 1pm, they’d cast off the lines, Vic had put the engine in gear and felt a terrible vibration. The shore crew grabbed them again, tied them back up and figured out something wasn’t quite right. Johnny the superhero stripped off his clothes, dived in to the dodgy looking marina water, went under the boat and felt around underneath, expecting to find a line wrapped around the propeller. But no, there was a blade missing.

Johnny the legend before he stripped off to his undies.

Just as we all thought the race was over, Gordy from Blink just happened to be walking past the boat and casually mentioned that he had a spare propeller blade that might just fit. Damon from Motorboat walked past who just happened to have some dive gear handy in a car up the road. Willie and Juliet sprinted down the marina to find the dive gear, Johnny had a quick lesson in how to attach propeller blades while trying to squeeze in to a wetsuit three sizes too small. 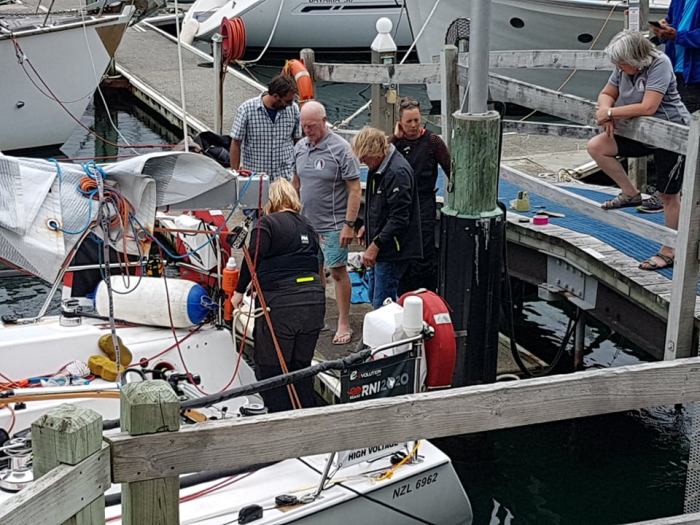 Is that a propeller blade in your pocket Gordy?

So by the time Naomi & my flight had landed (safely with both propellers) in Napier 45 minutes after the call from Juliet, the problem had been solved. The girls had made it to the start line with 10 minutes to spare.

Then just when we thought we could relax for the evening, Naomi and I managed to get ourselves locked in to the Napier Marina and had to get rescued. Juliet & Deb thought they were about to get car-jacked in Dannevirke by a sexy plumber but they were actually being told they had a burger and a drink on the roof of their car and Johnny had to fly home with wet undies on. 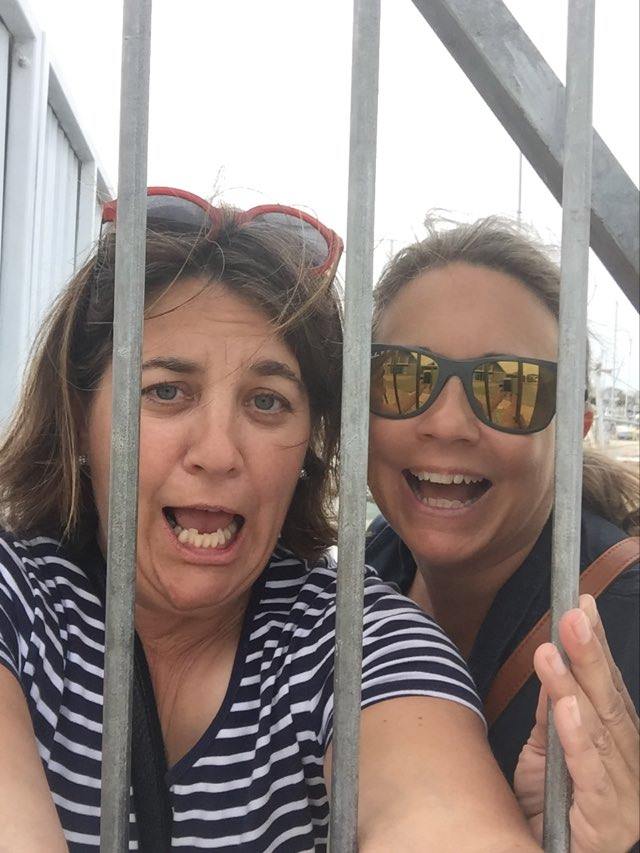 But that’s all just in a days work for the High Voltage shore crew, and of course all the help from the other boats. You guys rock! The camaraderie of this event is the best.

Thanks also to Vic’s lovely sister Emma who took some of the pics in this post.