This time last week we were somewhere off the Kaikoura Peninsula sailing from Lyttelton to Waikawa. I wrote about our Passage Plan last week. The weather was good, so us and some other boats – Natural Magic, Flying Machine and Jive Talkin were ready for our 180 nautical mile voyage north for the holidays.

The day started out calm and sunny with the promise of a Southerly change late morning to help us up the Coast. We had four of us on board, myself and Andrew and my crew Naomi and former crew member Kent – who now owns his own boat Manakura. We had an early start 6.40am we left the floating jetty at Naval Point Club Lyttelton.

Motoring up the harbour

An hour later we made it to the heads, the other boats were just leaving the harbour. The breeze filled in from the North! Not the West and South that we were expecting. Anyway we were sailing and making good progress albeit not quite in the direction we had hoped. 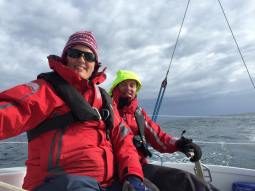 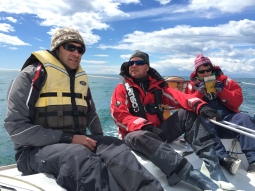 By the evening we had sailed for a good few hours and we were approaching Kaikoura Peninsula. We were surrounded by what felt like hundreds of dolphins doing jumps and flips for our entertainment and they took great pleasure in escorting us along for nearly an hour as we sailed along.

Andrew cooked up some of his famous spaghetti bolognaise sandwiches for our dinner. This was the highlight of our trip last year, so we had to do a repeat again this year. Having the spag bol wrapped in bread saved washing up and trying to balance a plate on our laps as we sailed along. 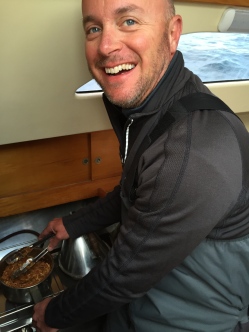 Cooking up the spag bol

We had full warm tummies and as the sun set we started our watch patterns. Kent and Naomi on one watch and Andrew and I on the other, we rotated around every 2-3 hours. The wind had died off, but the forecast was for it to build. We were motor sailing along any time our speed dropped below 5kts.

It felt like we had the current with us as we were sailing up the coast, but when we were approaching Cape Campbell it felt like the wind and current were against us. Natural Magic was just ahead and we were following her lights. We dodged a bit of shipping along the way and I realised just how hard it is to identify the size and distance of a set of lights on another vessel. I have no idea how close we passed or how big the fishing boat was that appeared to be heading straight for us at one stage… We must get radar and AIS on the new boat to give some peace of mind to us for night sailing!

At about 3am we passed Natural Magic, the wind was on our nose and it felt that we were sailing away from our destination. Cape Campbell light just never seemed to get any closer! I couldn’t concentrate any more, and it was freezing cold. I swapped places with Naomi and Kent we went below for some much needed sleep and relative warmth of a sleeping bag over the top of our wet weather gear!

When I woke up three hours later, we were only just going round Cape Campbell! It was absolutely freezing and there were black clouds behind us. We were officially in Cook Strait. One of the roughest stretches of water in the world, and thankfully today it was like glass. We motored along and put a reef in the main – the forecast was for a 35kt Southerly to hit late morning. Our plan was to be in Tory Channel by then. The tide was going to turn in our favour at 1115 and we were making good time to get there! 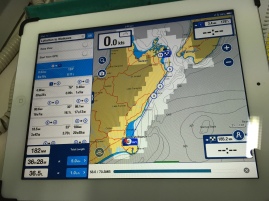 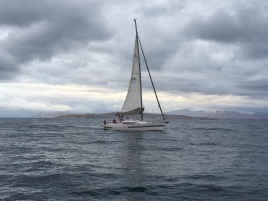 As we motored through Cook Strait we saw two whales! Just off our port side and travelling South – we didn’t have time to get a photo or a closer look before they disappeared below the surface.

We approached Tory Channel and just as we were lining up our approach through this narrow turbulent tidal passage a big ferry appeared between the gap in the rocks. We gybed back out to give them plenty of space and then once they were through we gybed back over and the tide sucked us in.

Time for a celebratory beer! 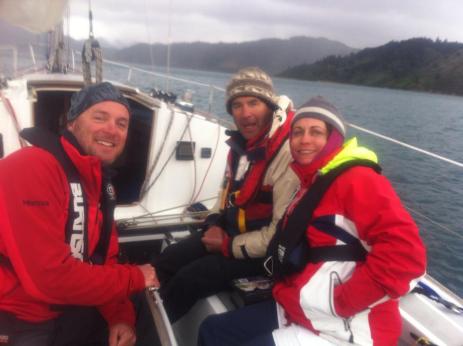 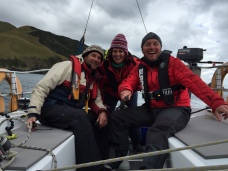 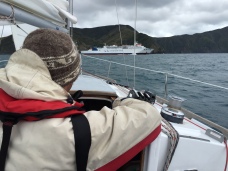 From the Tory Channel entrance, we motor-sailed through the Sounds assisted by the current carrying us along and in the pouring rain. We were safely tied up in Waikawa Marina by 2.30pm – 29 hours after we left Lyttelton (a new record for us – our last two trips took us 36 hours)

My lovely friend Emily had arranged for her Mum & Stepfather to drive our car up to Blenheim for us as they were heading that way anyway. Kai then very kindly came and collected us from Waikawa marina and we dropped him off in Blenheim on the way home.

We met up with the other yachts. They had all enjoyed the trip too, and we stopped in Kaikoura – half way home for dinner. Funny to have 14 people who had all been on the same adventure and yet we hadn’t actually seen each other in person – just as yachts in the distance and on our 6 hourly radio scheds.

So the yachts are all safely up there now, ready for us to go back on the 26th December for some holiday fun! I can’t wait!

Safe in the marina 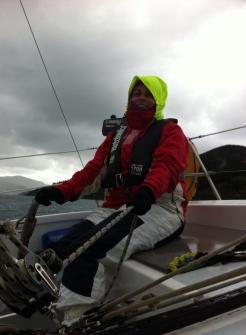 12 thoughts on “Our delivery voyage – Lyttelton to Waikawa”