We have just had a wonderful holiday on board Wildwood in the Marlborough Sounds. We had fantastic weather and lots of fun times with our great friends. However all good things come to an end, the holidays were almost over and we now have a year of work (interspersed with lots of adventures) ahead of us. This meant that we needed to get the boat home. 182 nautical miles away down the East Coast of the South Island of New Zealand.

We had a great trip up to the Sounds accompanied by two extra crew – Naomi and Kent. However this time it was just Andrew and I, and all the other boats were staying on in the Sounds to race in the annual regatta up there. The forecast looked pretty good – Northerly 25 knots easing as we made our way down the coast. After delivering our kids off to the airport and other parents, we departed Waikawa at 1330 on Friday afternoon and took full advantage of the tide to sweep us down the Tory channel.

Our first slight issue was at the Tory Channel entrance. This narrow gap has very strong tidal currents and we were being swept along at 10kts over the ground. We made a call on the radio to announce to all shipping in the area that we were going to be navigating through the entrance in 10 minutes time. We had the engine on and it wasn’t until we turned the corner that we realised there was a ferry heading towards us in the other direction. I immediately jumped on the radio and asked the ship which side he would like us to pass him on? He said he had been trying to call us, but I hadn’t heard over the noise of the engine. He told us to pass on his port side, so we immediately adjusted our course to as far over as we could go. We were committed at this stage – to try and turn around or stop would have been impossible with the current flowing so swiftly. There were some huge eddies which looked like they could suck us down the plughole at any moment! We accelerated more and went over as far as we could without dashing ourselves on the rocks. We were right amongst the cray pot buoys and were steering around them to try and avoid getting them wrapped around our propellor. Next thing the ferry gives us 5 short blasts on his horn! (5 short blasts means “what the f@!$ are you doing?!?!?” in ferry talk) so I jumped back on the radio “we are over as far as we can possibly go!!!” The ferry captain still claimed we were in his way… anyway here is the photographic evidence to show we were well clear. I think he was being a bit dramatic. Still it is not good for the nerves getting blasted at.

Lesson: Listen more carefully on the radio to see if anyone else is coming through the channel when we are going through there. This damn stretch of water has already laid claim to many of the grey hairs sprouting on the top of my head and I guess it can now claim a few more! 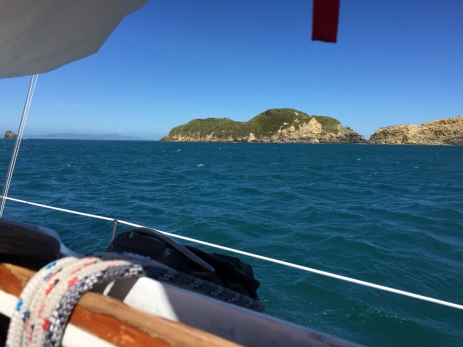 Almost there! No sign of any ferries just yet!

Going 10 kts. We usually only do about 5 under motor, so there was a very swift current carrying us out the channel whether we liked it or not!

Once we were through the dreaded channel and with the ferries out of the way we were relieved to see that Cook Strait was glassy calm. The forecast was for the wind to build, so we had hanked on our second smallest headsail and had pre-rigged a reef in the main. So we hoisted them and discussed whether we should shake out the reef and put up a spinnaker, but opted to have a beer instead.

After the beer, Andrew went down for a snooze, and I was on the helm. The breeze began to build, and build, and with it the waves got bigger and bigger. We were doing a respectable 8 knots, then 10, and then 12 knots… surfing down the fronts of these huge waves. We thought the wind must have been about 35kts. Andrew’s snooze didn’t last long before we flew down the face of a wave and did a big roundup at the bottom, sails flogging before we were lifted up on the front of the next wave to do it all over again.

We decided then that it would be best to have both of us on deck. The tiller was making some creaky noises which was a bit disconcerting. We had too much sail up, but with the size of the waves, neither of us fancied going forward to take the main down. However we soon changed our mind when the GPS read 15.2knots… it felt like a roller coaster ride that you can’t get off…

Waves are interesting things. The water itself isn’t actually moving, it is just a force rolling through the water. The size of the swell isn’t so much of a problem, it is the steepness of the front face of the wave that becomes an issue, and then how your boat reacts to that. In our case we had lots of wind and too much sail up. As the wave moves under the boat, it gradually picks up the stern (the back bit) first, so you go from one minute looking across the flat deck of the boat, to then feeling like you are up really high and are looking down at the bow. It is at this stage you start to hear the wave beginning to break behind you. It is almost too scary to turn around and look… you know the sound you hear when you are at a surf beach and you know you are about to get a big wave dumped over your head? Well it sounds exactly like that. At this stage your hand grips hold of the tiller so tightly that your knuckles go white. The roaring water behind you, looking down – way down to the bow of the boat which feels like it is miles away, the trough of the wave is below that. And that is when you start to pick up speed… lots of speed… the boat starts to fly down the face of the wave and in to the trough below. The water down there isn’t going as fast as you are though, so you race down the front face of the wave and stop when you get to the bottom, either with the boat doing a ’round up’ (trying to turn back in to the wind) or with any luck not doing that, and the wave eventually passes underneath. You really want to avoid running in to the wave in front or ending up side on to the breaking wave. Either one of those options is not good and can result in the boat rolling either end over end or side on. Thankfully for us we didn’t get anywhere near doing that, but I could feel we were on the brink! 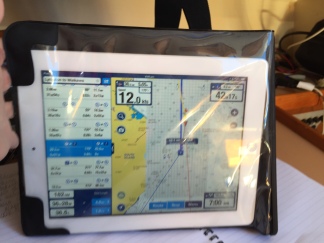 We made a plan. There was no sign of the wind easing. The main had to come down. I steered, and Andrew went up on deck. We attempted to turn in to the wind but that proved to be a bit difficult and so we floundered about in the waves while Andrew wrestled the main down and managed to tie it to the boom. Things felt a lot more manageable now, however we were still surfing way too fast down the face of some of the steeper waves, so we deployed two lines from the stern cleats. These act as drogues to slow the boat down, keep the stern in to the waves and hopefully they then pass smoothly underneath you as opposed to you flying down the front. This did certainly seem to do the trick, and we continued for the next 5 hours or so with just the #3 headsail and the lines trailing out the back until about 1am.

I’d had a couple of hours of what I would like to call sleep, but it was more like laying there with my eyes shut, but by the time I came back on deck, the wind had died almost completely leaving a rolly sea. We left the headsail up and started the motor and a long slog against the Kaikoura current, the GPS now only reading 3-4kts as opposed to our previous 15kts! I stayed on watch for as long as I could, admiring the millions of stars, watching for shooting stars and avoiding fishing boats. At one stage I got completely freaked out by what turned out to be the moon rising over the horizon. My sleep deprived brain could not figure out what on earth it was. Then when the depth sounder went from reading over 1000m to just 5.2 metres depth, I lost the plot and woke Andrew up!

I actually got some real sleep on my next break, and Andrew woke me three hours later to find that we were surrounded by thick fog… 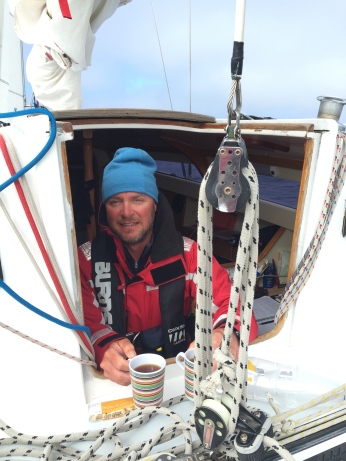 This was more than a little disconcerting. We don’t have radar, or a radar reflector on board. However Kent was telling us on the way up that we could make one using tin foil in a plastic bag and hoist it up the mast. So we did that. Not sure if it works, but it made us feel slightly better. We went from barely being able to see the front of the boat to big clear patches and then back in to the gloom again. Andrew had the marine traffic app on his phone, and we checked that and couldn’t see anything in the vicinity, however we hadn’t had much success with the app last year so we were hoping it had improved since then!

The fog gradually cleared to a bright sunny day, and a nice NE breeze right up from behind, so we hoisted the mainsail again, shook out the reef and broad reached across Pegasus Bay towards Banks Peninsula and finally home – 32 hours later. Which is three hours more than it took us to sail up the coast but about four hours less than we did it last year. I even got the opportunity to practise using my sextant!

Practising with my sextant

Yay we made it!

We cracked open another beer as we were sailing up the harbour, and finally arrived at the yacht club jetty about 9.30pm. We stayed aboard, absolutely shattered, sad that the holidays were over, but happy to have the boat safely home. Another adventure, and more lessons learnt!

Here is the video of our trip.

24 thoughts on “Ferries, Fog and a taste of the Sea’s Force”