When the alarm went off at 4.30am, I realised that staying up partying on the boat until 1.30am means you don’t get enough sleep to feel refreshed and ready to go. Will we ever learn?

Still it had been a fun impromptu evening which had started with a flight delay in Christchurch, meaning we’d had to partake in a few extra glasses of wine in the Koru lounge to keep us entertained there, followed by a couple more wines at the Royal Port Nicholson Yacht Club in Wellington when we landed, and concluded with more wine and rum back on the boat with our new sailor friends we’d met at the club. Thanks for a great night Katie, Irene & Stuart!

Regular blog readers will remember my recent post about the Women’s Regatta in Waikawa a few weeks ago. Since then Vic had raced her boat High Voltage across Cook Strait from Picton to Wellington in the Wine Race and had left her there due to the horrible weather, now it was time to sail her home.

I feel like a bit of a rock-star crew member being flown in for a delivery trip, and I must admit it is very refreshing to simply turn up for a passage as crew and not have to consider all the logistics, weather, safety, planning, organisation and everything else that falls on the shoulders of the skipper – thanks Vic!

Anyway back to that damn 4.30am alarm… I hit snooze and then heard the heavens open and the rain drumming on the deck, it was freezing cold. So much for Spring! Still the weather forecast promised a favourable breeze and as “Time and Tide waits for no man” we begrudgingly hauled ourselves out of our sleeping bags and in to our wet weather gear, cast off the lines and pointed High Voltage’s bow out of Chaffers marina and out in the direction of Cook Strait.

Thankfully Craig had been to the supermarket when he’d arrived in Wellington off the ferry, so we sipped on hot coffee and nibbled on croissants and Stugeron as we motorsailed out of the harbour, dodging navigation lights and InterIslander ferries along the way.

Cook Strait is a pretty intimidating stretch of water to go sailing in. A quick google search brings up all sorts of scary comments designed to strike fear in the minds of any sailor or Interislander ferry passenger:

The Strait itself is a relatively narrow body of water separating the North and South Islands. The high mountains on the islands cause the wind to funnel through the gap, and when its high tide on one side, it is low tide on the other, and the submarine canyons force the water upwards – creating a whirl pool of fast flowing currents which when also rubbed the wrong way by the wind can create some pretty interesting conditions for people in small boats…

Anyway with all these encouraging comments in the back of our mind, we motorsailed out of the harbour against the incoming tide, out in to Cook Strait. We (well Craig & Vic really – but I steered) hoisted the enormous mainsail on High Voltage, with one slither of a reef in to make it slightly easier to handle, and with the wind off our port quarter and a #3 head sail the speedy boat put her ears back and started flying across the somewhat disconcertingly flat water in to the gauntlet ahead.

“Ahhh easy peasey” I thought as Craig & I rested our eyelids for a bit, leaving Vic on the helm.

It wasn’t until about an hour after that when Vic said something along the lines of “Uh Oh…” Or perhaps it was “You two had better wake up now…!” when things started to get a bit more interesting…

There are a couple of particularly hairy bits for the sailor to navigate on their way across the strait:

On the chart the notes relating to the Korori Rip read as follows:

“The Karori Rip extends between Sinclair Head and Cape Terawhiti. Extreme overfalls and tide rips may be experienced up to 2.75 miles offshore. An area of turbulent eddies exists periodically to the north of Cape Terawhiti depending on meteorological conditions. Karori rip is North West going from the Wellington High Water time to five hours after and South East going from 7 hours to one hour before Wellington High Water. The maximum rate may exceed 5.25 knots at spring tides.”

The cruising guide says: “Strong southerly winds with a SE setting tidal stream can make this area a real horror show, and in the interests of safe boating and harmonious crew relations, should be avoided.”

The extremely flat bit of water was fast coming to an end, and a very vivid line of white breaking water clearly marked the beginning of the “horror show”.

While it was a bit like navigating your way through a washing machine on spin cycle, it actually wasn’t that bad really. Perhaps it was because I wasn’t on my boat? But I thought it was all quite interesting, and while I happily snapped photographs as we slammed through the very steep crazy waves coming from all directions, I was thankful that we’d chosen the preferred time to go through. (And if this is good then actually I really wouldn’t like to see that on a bad day…!) 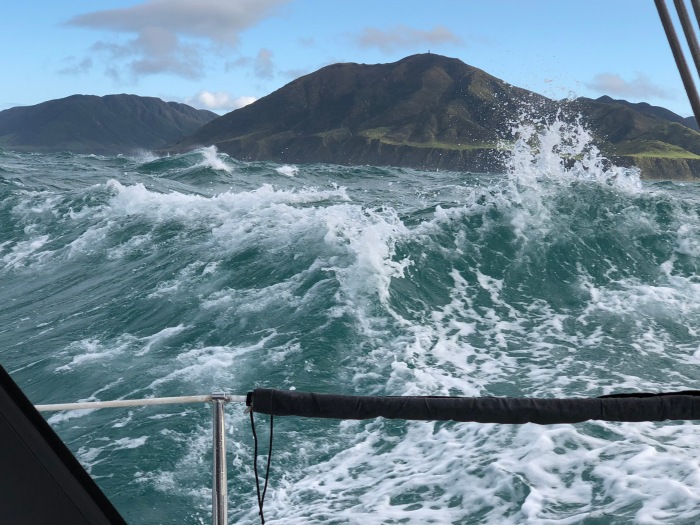 (And remember it is virtually impossible to get a decent photo of big waves – so just imagine them looking about 50% bigger than they appear in the pictures above and you’ll get a better idea of what it was like.)

Once you are through that then you’ve got a pretty good straight run across the Strait until you get to Tory Channel.

Tory Channel is the cause of most of the grey hair on my head.

Do I need to elaborate on that?

Well there was the time we decided to try and go in against the 7kt tide, when we can get about a maximum of 5 kts on our motor. Or the other time that we nearly got run over by the ferry on the way through…

Anyway the crazy tidal current in here is a force to be reckoned with in a small boat, so I can only recommend that you check the tables to make sure you’ve got it on your side, otherwise you are in for a loooong hard slog unless you’ve got a few more hp than I do under your belt.

Thankfully today everything was in our favour.  It was a fantastic day for sailing and once we were out of the rip we had a romping sail with the wind up our bum and the current in our favour, we were hooning along at about 11-13kts!! Craig even made us some deeeelicious ham rolls for our lunch. Yummo!

It took us three hours to scoot across the ditch, before we arrived at Tory Channel entrance. We didn’t even get run over by any ferries on our way through the narrow gap! Perfect!

So apart from the late night, lack of sleep, hangovers, rain, and washing machine waves for a short time – we had a fabulous crossing of Cook Strait! I loved every minute of it! Thanks Vic, Craig & High Voltage!

Weather for the sea area Cook can be found on Metservice here.

You can check the tides for Wellington Harbour here.

You can check the current for Tory Channel here:

The Current in the Strait itself is very strongly influenced by the wind, and it is very difficult to predict. The streams can sometimes run in the same direction without changing for 10-18 hours!

The best time to transit the Karori Rip is at slack water. In full flow the Karori rip can run at 7kts and cause loss of steerage and very steep waves.

If you are leaving from Wellington, aim to be at Sinclair Head 1 hour before high tide in Wellington. This will give you a favourable current across the Strait and also hopefully in through Tory. (It took us an hour to get from the Marina to the Heads at Wellington). This is preferable in a Southerly wind – giving you both wind and current in the same direction.

If you’ve got a Northerly breeze then aim to arrive at Sinclair Head 1 hour before LW WLG. This will give you an adverse current across the Strait but this may be preferable in a Northerly wind, and you should arrive at Tory around the time of slack water.

If heading in the other direction – from Marlborough heading towards Wellington – leave Picton at high tide. This means you’ll have current in your favour through Tory Channel and arrive at Tory Entrance two hours after the tidal stream commences setting East – giving you a favourable current from Tory to Wellington. Preferable in a Northerly wind – giving you wind and current in the same direction.

In a Southerly, leave Tory as the tidal stream starts setting West, you’ll get wind and current in the same direction, and you should arrive at Karori at slack water.

Remember to give a warning on the VHF to all ships 10 mins before you go through Tory Channel and keep a listening watch on channel 16 or 18 or 63 to hear what ferries are creeping up out of nowhere to run you over when you least expect it… Ferries have right of way through the narrow channel, but once they are out in the Strait the usual COLREGs apply.

Keep an eye out for Cray-pots too – they seem to be dropped all over the show right at the entrance, and the last thing you want when going in to Cook Strait is a line wrapped round your propeller!

If you are going through Cook Strait – i.e from Wellington to Nelson then there are a few other hazards to be aware of as well:

You can read more about our sailing antics in Cook Strait on the Wellington to Nelson race post.

Feel free to share your Cook Strait antics with me in the comments below. I am sure I’m not the only one with grey hair from this stretch of water…!