I have been busy lately, I recently left my job in politics and started a short term contract at my yacht club, helping out in the office until a new manager is appointed.

Sadly, about a year ago, the club manager passed away suddenly. He had been involved in the club for many years and had lots of knowledge all stored away in his head. To fill the gap volunteers came and helped out, and then another manager started, but didn’t stay for long. This all meant that the club administration was in a huge tangle by the time I came along.

Nice view from my office

The treasurer had spent a lot of time trying to straighten out all the accounts, so things were getting back on track. We got the end of financial year sorted, and had managed to have a big re-jig in the bar. However one job remained…

Even just mentioning the word ‘storage’ sent shivers up the spines of the other staff members. I turned the office files upside down looking for any notes or clues on who might belong in which spot, or who was paying what, all to no avail.

One day someone came in to the office very upset that his boat had been moved out of the shed and was now sitting in the compound. When the person who moved it turned up, there was almost a fight!

There was no choice. it had to be done, and I had to start from scratch.

I enlisted the help of Brian – the ‘go to’ guy at the club who can fix anything. Gingerly we ventured out the back of the club to the sheds.

I have got an amazing key which opens everything, and so we were quickly in to the first shed. The sheds have a rack – so two boats on the top and two boats on the ground. We pulled out one of the boats on the bottom to get further back in to the shed as conveniently none of the white sailing dinghies appeared to have any names on them!

We have got a huge family of cute rabbits that live under the sheds. They come out in the evenings and play on the grass rigging area, bouncing around until a dog comes along and then they disappear back under the shed. It appears that something else also likes the rabbits, as I was crawling in under the first boat, I looked down and realised that I had a rabbits ear stuck on the bottom of my boot. 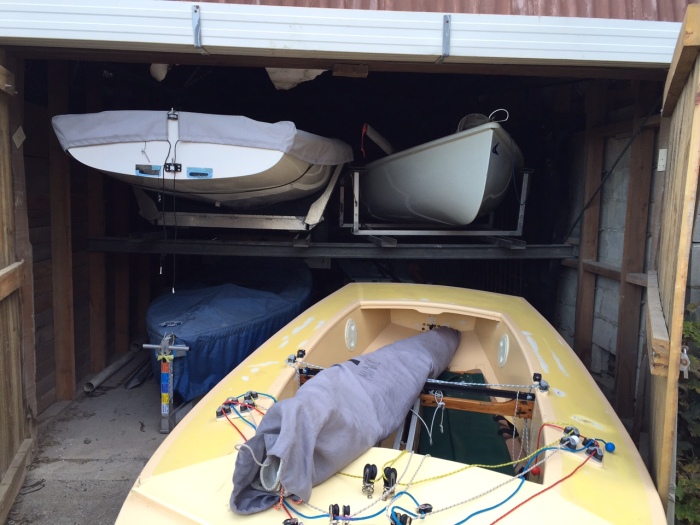 I think it was at this moment I realised that this job wasn’t going to be as easy as I had first anticipated.

I haven’t sailed dinghies for years, and so trying to distinguish one white sailing dinghy from another can be quite a challenge. Is it a Laser, Phase II, 420 or a Starling? Hmmm – some had names, others had numbers, some had nothing. But one by one we worked through each shed, drawing a map as I went along.

Then we came to the compound.

Imagine a fenced area with a whole pile of boats all in various states of disrepair all jumbled around. Some look like they haven’t seen any water, apart from the leafy soup washing around inside, in a long while.

Brian helped me move the boats from a big jumble, in to a sort of line, so I could give each mystery boat a position on my chart and then began the next task – finding out who owned what!

I checked the handbook – typically none of the boats listed in the ‘boat register’ were boats that were on my list. Next stop – a game of “Identify that boat!” on the club Facebook page – with the winners getting a nice shiny new storage invoice! The losers (the unidentified boats) were threatened with being removed from the compound – or even worse Brian had his hopes set on a big bonfire… eeek!

Before I knew it, people were dobbing each other in left right and centre. Some people even came forward voluntarily. Slowly but surely, most boats ended up with an owner, and that owner had another bill to pay.

I am now obsessed with finding an owner for every boat. I think I have got about 10 boats and a whole shipping container with contents unknown that are still unidentified. Slow progress.

I have made a very sexy new folder with a map and a list of who owns what, hopefully this will make things much easier for the next person who comes along to do this lovely job again next year.

Meanwhile, I am quietly looking forward to Brian’s bonfire… 😉