This story carries on from Chapter 1 – Chatham Island Adventure.

After lunch we drove back to the airport. The pilot let us in to the tarmac and we helped him load the little plane chokka block full of freight for the Pitt Island Residents. Everything from eggs, spare parts, and clothing, along with all our gear, the pilot and four of our team – with the others to come over on the next flight.

Thankfully it was a super clear day, and we had the most amazing views during the 15 minute flight. We landed safely on the grass landing strip to be greeted by Brent from Flowerpot Lodge, and ten or so of the locals – pretty much the whole population of the island – who were waiting to pick up their mail.

We stretched back on the grass and waited for the others to arrive. 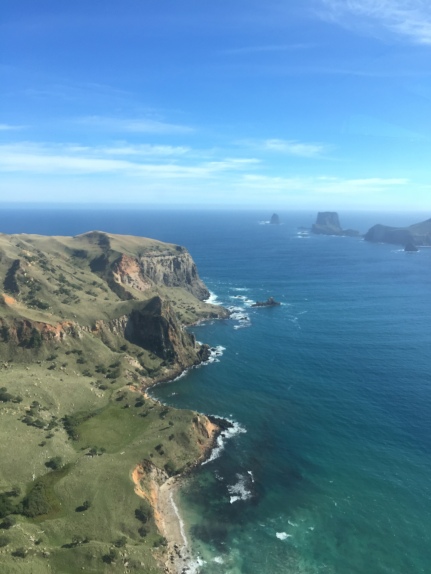 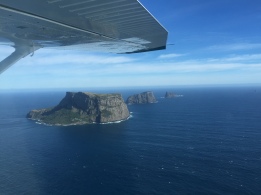 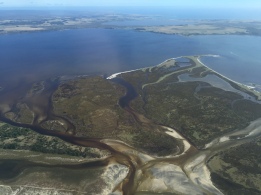 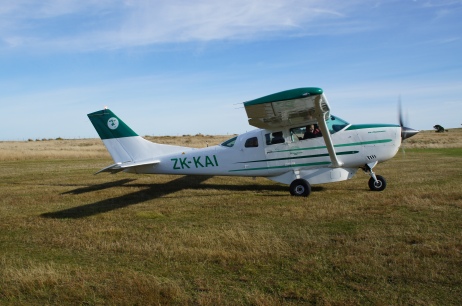 Pitt Island is said to be the most remote inhabited place in New Zealand.  Located about 20m south of Chatham Island. Back in the 1800’s a few Moriori people lived here and Frederick Hunt was the first European to inhabit the island. He set up his farm in Flowerpot Bay and started trading with whalers and sealers who were hunting around the southern ocean for their prey.

Flowerpot Bay Lodge is located on the site of the original homestead and was where Bernie was born. After she married Brent, they decided to build this stunning lodge. They cater for day visitors to the Island and have five gorgeous bedrooms for people who would like to stay. They have only been open for a couple of years. All transfers, accommodation, meals and activities are included. All we had to pay for was our drinks. 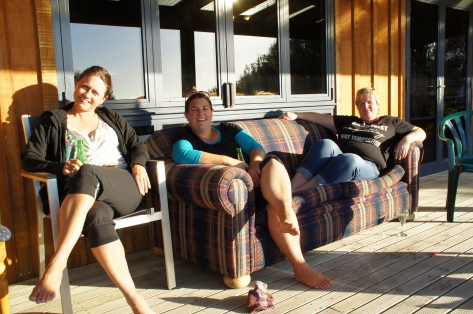 Enjoying the sun on the deck 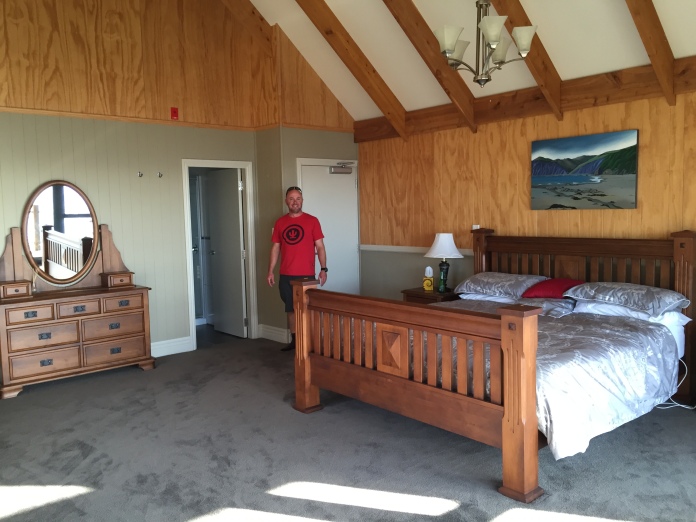 While Bernie prepared our dinner, we headed down to explore the beach, including an old jail that had been carved in to the cliff. This was used to hold the seamen who had jumped ship when their vessels had called to pick up fresh provisions. 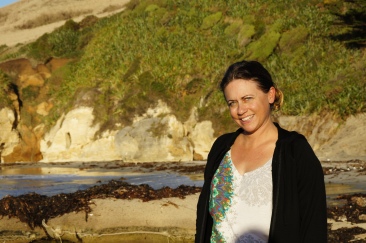 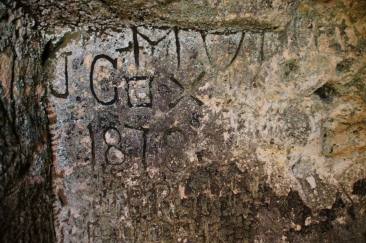 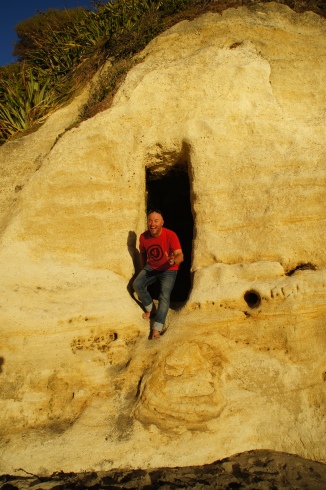 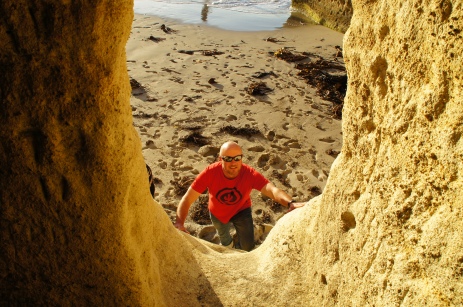 The following morning we set off about 10am after an amazing breakfast and headed for Simeon’s Bay. We drove across a farm and then parked in the bush. We then clambered down a hill across a saddle and up a steep bank to a point. Then sidling around and down a cliff face to some flat-ish rocks where we went fishing. 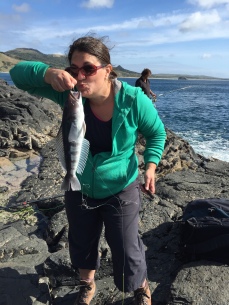 I caught the first blue cod. The seaweed claimed their fair share of our tackle, and we had a great day reeling in blue cod after cod. We ended up with 17 great sized fish for our dinner.

Coming back Dave and Willie went down to a beach where they collected paua in knee deep water. They said the paua were packed so closely together that they had trouble pulling them off. Simeon’s Bay would be a good anchorage in a southerly. 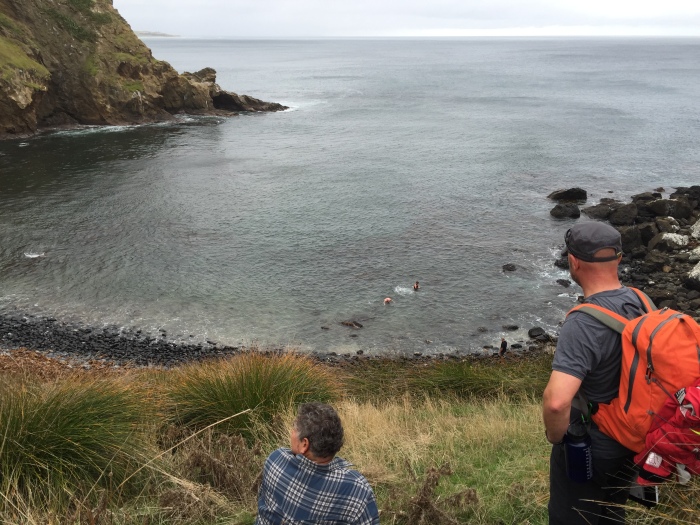 We then headed to Caravan Bush bird sanctuary. The bush is protected by a predator fence. Although there are no rats, rabbits or possums on the island. There are feral cats. The bush has quickly regenerated and it is easy to see the difference the stock do on the barren other side of the fence. The birds all looked very happy and we saw a petrel chick and some Chatham Island Tom Tits. There are only about 1000 of these birds left so it is wonderful to see them so prolific.

On the way home we stopped and gathered some fresh mushrooms from the side of the road. 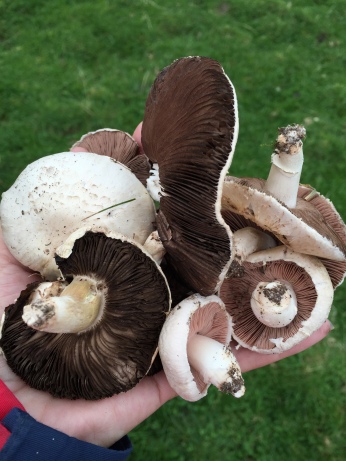 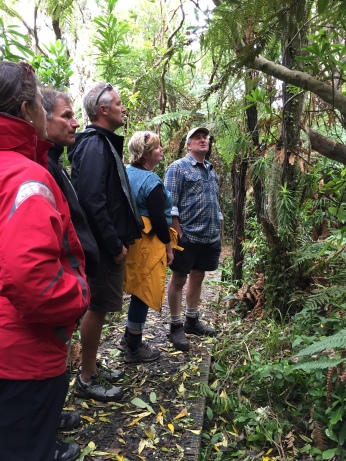 After another amazing dinner of fresh blue cod and mushrooms, accompanied by lashings of red wine, and stories of the Island told by Brent. We hit the sack early. The next morning we had a busy day planned…

The alarm was set for 5.30am and after slurping a mouthful of hot coffee we were in the van driving along shingle roads to our destination – the foot of Mt Hakepa. With headlamp torches switched on we hiked up the steep rocky track in the dark watching the full moon set on the horizon to the West as the sky to the East grew ever lighter.

Our reward for this early start was to see the sunrise. The international date line does a dog leg around the Chathams. If it didn’t then this little archipelago off the East Coast of New Zealand would be a day behind the rest of the country. By hiking up the highest point in the east Coast of Pitt Island we would guarantee that out of a global population of around 7 billion people, we would officially be the first ones to see the sun today.

The sky was becoming lighter as we all hurried up the track. We gathered next to the millennium sculptures and watched the sky change a multitude of different colors of pink and orange before our eyes. 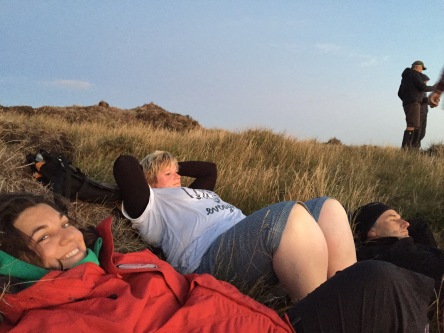 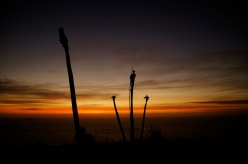 The clouds on the horizon had us wondering if we would actually see the sun rising at all but just as we said that the top of the glowing ball rose steadily above the horizon. We cheered and cracked open a bottle of champagne to celebrate. 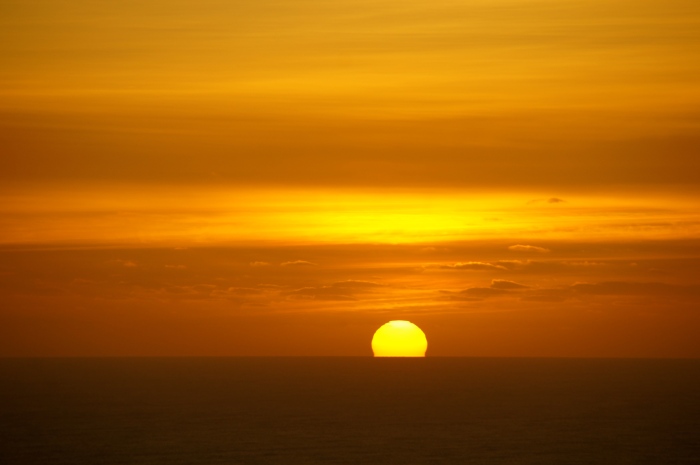 We hiked across the top of the mountain in search of an albatross family who come here every year to nest but on this occasion they weren’t home.

Then we went back to the lodge for a huge cooked breakfast!

After a quick turnaround we headed back out with three 4 wheel motorbikes and the van and headed to the south side of the island. The bottom half of the island is owned by the Department of Conservation and part of it is still used as farmland. We stopped off to see Glory Cottage – the oldest wooden building on the Island which has been restored by DOC. 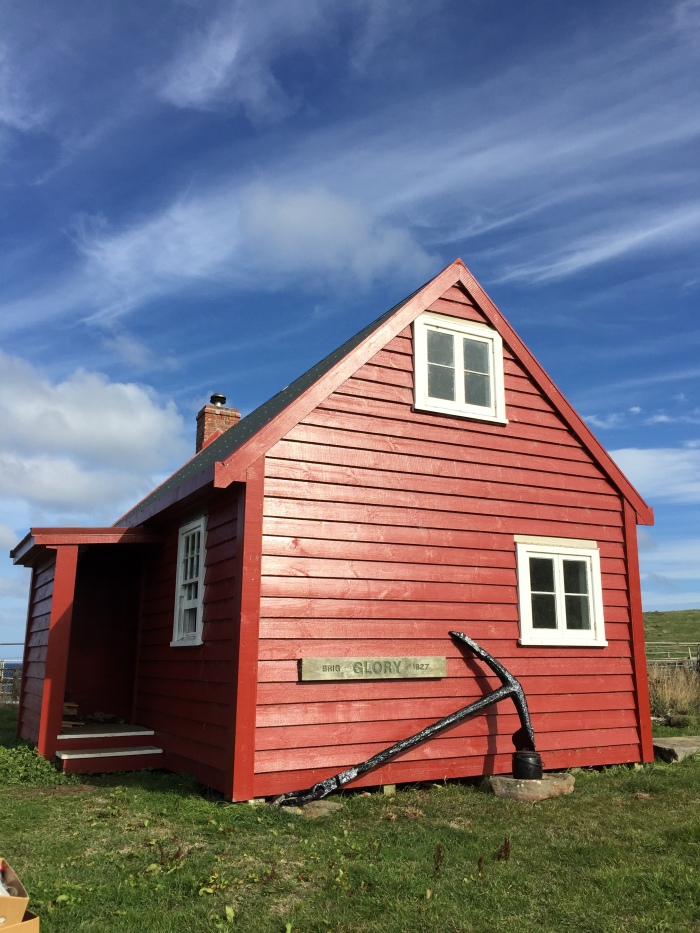 We carried on further and went through a gate and entered an area covered in flax and rolling hills. The track was very overgrown so it was entertaining riding through the flax and up and down the hills through the bush until we reached the peninsula. The views out either side were breathtaking with sheer drops down to the ocean crashing on to the rocks below. Looking to the south we could see several Rocky islands which are bird reserves. The ocean swells were breaking over partially submerged weed covered reefs. 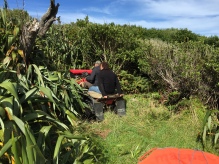 We had originally only planned to stay for two nights on Pitt, but we were being so well taken care of, we decided to stay another night!

Brent has an 8 metre aluminum jet boat and offered to take us out fishing. The day was windy and the barge was stuck on the ramp so we had to launch the boat from the beach. This proved to be a bit more difficult than originally anticipated when the tractor and boat trailer became stuck in the soft golden sand.

The next thing we knew Brent had started the digger parked nearby and with the help of the boys the trailer was lifted up out of the sand and then used to push the trailer back in to the water. Not sure if diggers like being used in salt water but it was certainly an effective way of getting the boat launched.

Naomi and I stayed ashore and had tea & sponge cake, while the others headed out for about an hour just around the corner from the house in a secluded bay and reeled in fish after fish and soon had a bin full of big blue cod.

Filleting them took some time but we soon had four large bags of white fillets waiting to come back with us to Chatham Island.

All too soon it was time to leave. We packed the van full of all our gear and headed back to the air strip where our little plane was waiting to carry us back to the Chathams.

We were all sad to leave, and I think we all would have been happy to stay even longer if we didn’t have more territory to discover back on Chatham Island. Brent & Bernie at Flowerpot really looked after us, and the whole place is just spectacular.

Their plan is to have a three day walk around the Island set up next year. Each evening you would return to Flowerpot Lodge for your luxury accommodation and meals prepared by Bernie before heading out again the next day to explore this fascinating place.

Tune in to instalment # 3 of this adventure – Fishing in the Chatham Islands – coming soon!