These were the encouraging words that Craig had given us that kept ringing in our ears as we were floating about in a big rib attempting to wrestle with a massive “Mr Blobby” buoy for the Young 88 South Island Champs.

Not sure that I had ever seen Miss Piggy in a boat before – I am sure she would look glamorous – but regardless, we desperately didn’t want to look like muppets. This was a serious regatta, and my friend Nicci and I had been asked to assist the race management team by laying the marks for the day’s racing.

I’m not usually on this side of a race before, and up until now I have been completely oblivious to the amount of work that goes in to running a regatta on the water.

We had been given a big rib with a fast motor to drive for the day and this was filled with anchors, chains, long lines and huge buoys. Our task was to get these in the right position for everyone to race around.

“Jacqueline, Jacqueline, this is Mark Boat – do you copy?” I crackled over the VHF

“Mark Boat, this is Jacqueline – go ahead please”
“Oh – just wanting to check that the radio is working – and it sounds like it is!!” We might not have looked like muppets just yet, but I possibly sounded like one… anyway we were given instructions on where to lay the top mark, and we sped off at high speed to the  other end of the course.

Once we got there we realised that nothing was tied together. Luckily Nicci had been given some instructions on how best to lay a race mark, and so we got busy, tying the anchor and chain to the line and then the line to the Mr Blobby lookalike. Then there was a weight added to the bottom of that as well.

Nicci is left handed and she confidently tied a left handed bowline on to the anchor chain. “Is that a bowline Nic?” I queried. Hmmm the pressure was on and we weren’t sure now, so we tied it again and it fell apart! Pressure! We only had 10 minutes until the race started. We tied it again and added a few extra granny knots – just in case… we sped off back to the start boat to lay the start pin.

“BANG!” went the gun as we dropped the start mark – the race was starting and we were still in the way. The wind was up and the rising sea was causing waves to splash over our faces. The start line was short and the boats began to chase each other around the start line and then finally they were off tearing down the course.

Flying Machine was ahead – with Andrew on the bow tearing off down the race course closely followed by Whistler and 88% Proof. We had time now to lay the bottom mark and then get on board Jacqueline to watch the action from the comfort of this lovely launch.

Pete, Karen, Anna & Dave were the race officers and they welcomed us damp mark boat girls on board Jacqueline. Her spacious salon had a 360 degree view of the stunning Marlborough Sounds, sheltering us from the cold breeze that was now whipping the wave tops off in to white froth. Flying Machine had reached the top mark (that was thankfully still in the same place we had dropped it) and they had hoisted their kite and were flying back towards us. We stood on the bow taking pictures and being cheerleaders for the boats as they flew past.

It looked like hard work on board the race boats, but for us on Jacqueline we were sipping on cups of tea and eating sandwiches in between starting and finishing races, taking times – and – shooting guns!

Anna was packing heat – which I believe is the correct terminology for someone wielding a hand gun. Her usual weapon of choice for starting races is a shotgun, but this is a little bit large to take on the plane from Wellington to Blenheim. So she had bought herself a nice wee pistol. I made a mental note not to upset Anna…

Karen had the clock, Dave was waving the flags up and down at the correct times, Peter ran the show and Anna pulled the trigger while Nicci and I tried to keep out the way – crossing our fingers that the marks would stay in the right place and that we wouldn’t have to go out there and move them any time soon – the wind was up around 25 odd knots now and getting in the rib would mean we would get very wet! 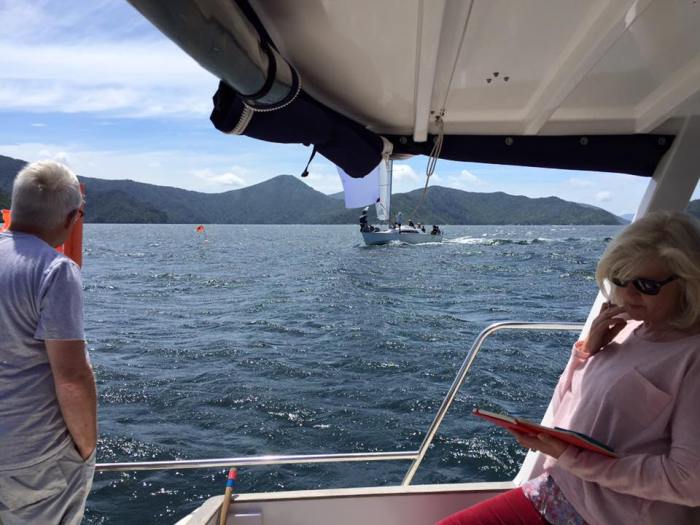 Before we knew it, four races were done. The wind was now gusting over 30kts and a decision was made to abandon the racing for the day. The end result wouldn’t change the final positions. Peter got to work with spreadsheets working out all the various handicaps, the line results were what counted for this one class regatta, but Peter thought it would be fun to see what the different handicapping systems thought of the race times. 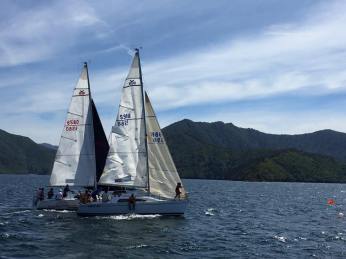 There were still a few blank bullets left and so Anna let me fire off a couple of shots in the gun – yeah that was fun! Hopefully no seagulls were injured in the process.

Then we were back in the rib. Conveniently the wind had eased as soon as the racing had been abandoned, but the waves were still rolling us around which made pulling up the marks and anchor quite difficult. We wrestled the start pin on board and Jacqueline steamed forward to pick up the bottom mark using the windlass. Thankfully they were able to untangle our knots. We came alongside in the waves so that Mr Blobby could be dropped in to the rib but “GRAUNCH” the strange sharp roll bar on the back of the boat gouged a big scrape in the side of Jacqueline – “Noooooooooo!!!”

I felt terrible of course. In the process of trying to fend the front of the boat and manhandle this huge mark in to the rib I hadn’t been looking at the back of the boat. Never had I seen a rib with so many sharp bits protruding from it. I apologised profusely – and felt quite a lot like a muppet at that stage.

Then it was back to the club for prize giving. The Whistler bow girl had walked in to the boom and was sporting a huge black eye. However the pain was soon eased as the tops came off the bottles of rum prizes. Flying Machine had won the South Island Champs for the 3rd year in a row and everyone was in the mood to party! 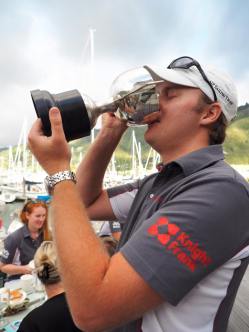 Everyone thanked Nicci and I for our amazingly skilful mark laying. Buttering us up for more of the same I think – but hey – we’d had a great day! Being on the start boat (especially one as luxurious as Jacqueline) is great fun. We got to see all the racing action up super close. We got to zoom around in the mark boat, we got to practice knot tying under pressure, we drank tea, shot a gun, and learnt a few new things.

We might even do the race officer course this winter… After the day we had with the Jacqueline team, I’m happy to leave the serious racing for this crew!