There are so many stunning places to discover in New Zealand, you just have to be prepared to get off the beaten track, drive over rutty shingle roads, walk for ages and get your feet wet to find them. 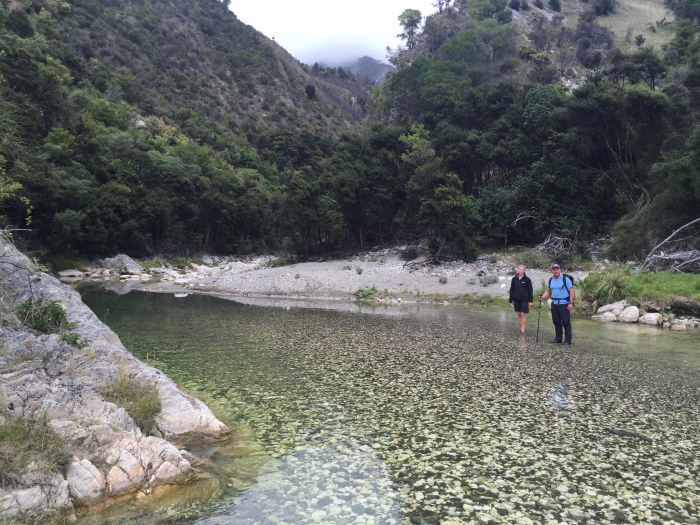 The Sawcut Gorge is one of those places. Flipping through a dog eared magazine in a doctors waiting room a couple of years ago, I saw some pictures of this beautiful place and made a mental note to visit sometime.

Last weekend a perfect opportunity arose. After spending a couple of days on the water in the Marlborough Sounds, starting races and shooting guns, we had a completely clear day available for an adventure. The hiking boots were packed, some sandwiches purchased and we were off!

On State Highway 1, between Kaikoura and Blenheim, about 9km South of the little town of Ward is a narrow shingle track – called Ure Road. There are no signposts indicating the hidden gems of scenery ahead. We followed the ribbon of a road high up in to the hills, crossing farm land, opening and closing gates, passing cows lazily chewing on grass, and driving for what felt like a long time.

It was actually only about 11km, but eventually we reached a particularly steep section bringing us from high up in the hills almost straight down the back down to the riverbed. I was particularly pleased we didn’t meet anyone driving the other direction. We opened another gate and found ourselves in a farmers garden.

There were a few cars parked beside the house, and the home owner was standing on his lawn. I got out of the car for a chat.

It seems we were in the right place. He gave me a printed map and asked me to sign the guest register book. If you are planning on heading further along to Isolation Hut for the night then you should check with these people to make sure that there is space in the hut before you head up there.

We were just doing the day walk, so with map in hand, we proceeded down an even steeper section of shingle track with huge ruts. We parked by the flies buzzing around the long drop toilet. “We got DoC to dig that toilet this year” the man told me. “disgusting trampers shitting all over the river bed” He said. “My dogs go down and roll in it… revolting” Eeeww – I shuddered at the thought.

Jandals off and boots on (jandals are also known as flip flops or thongs for those of you who don’t speak Kiwi) we packed our sandwiches and drinks in to our backpacks and set off along the track.

Except there isn’t much of a track really. Just bright orange triangles nailed to trees. It is hard to get lost as you are just following the river upstream on whatever side seems to be the easiest one to walk on.

On the first couple of river crossings we picked our path carefully, attempting to keep our boots dry for as long as possible. I am not sure why we bothered really, as it is impossible to do this walk without getting wet. The water was clear and warm, and the deepest it got was just over the knee for me. But the stones were slippery and the current was swift in places. I was pleased it was a nice day with no rain in the forecast. I think it would get quite dangerous when it floods. I had my trusty tramping walking stick on hand to assist with the crossings, and for poking things should I decide I want to poke something. 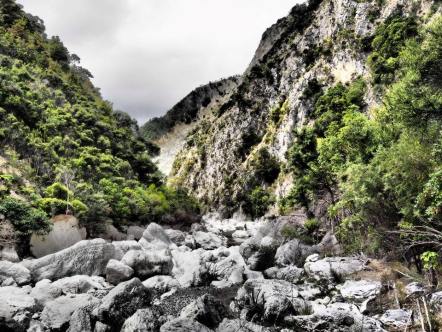 Actually walking in wet boots isn’t as bad as I thought it might be. We zigzagged across the river many times, sometimes following a track, other times clambering over large boulders. The orange triangles giving some suggestions on where might be the best place to go. We passed deep blue crystal clear pools that looked very enticing on this warm day. But we were on a mission to get to the gorge. Nicola skipped on ahead like a nimble mountain goat while Andrew and I lagged behind stopping to take millions of photographs.

The walls begin to close in on you the further up the river we went. At one stage the cliffs rose high above as we sidled along below them. I momentarily thought about earthquakes and falling rocks, and hurried past.

We eventually reached a sign indicating we were getting close, we went around the corner and the river seemed to disappear in to a slit in a huge rock wall. wading through the water and in to the rock cutting, we had reached Sawcut Gorge. 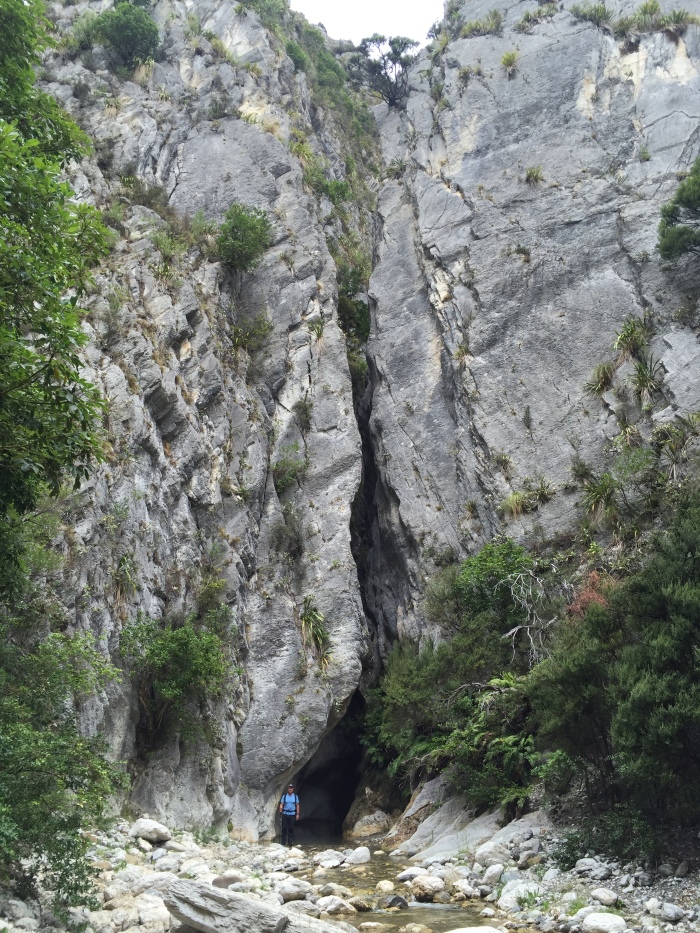 I wondered how many millions of years this river must have been carving its way through this massive lump of rock. Ever so slowly creating this very narrow cutting. Just a couple of metres wide, about 20 metres long and what felt like at least 4 or 5 stories high. It was beautiful to walk through and out to the other side, in to a secret garden, completely enclosed by more steep cliffs.

But wait there’s more! We waded on further and found another cutting through the rock. This one even narrower and higher than the last we had come through. It was like we were on the other side of a mountain having walked through a natural tunnel to the other side. You don’t need a torch as the sunlight comes through the top.

Suddenly hungry, we picked a smooth rock and stopped for a sandwich or two. It was hot and I wished I had brought more water with me. Or a nice cold beer. We had some beers in the car, so that was some good motivation for the walk back. 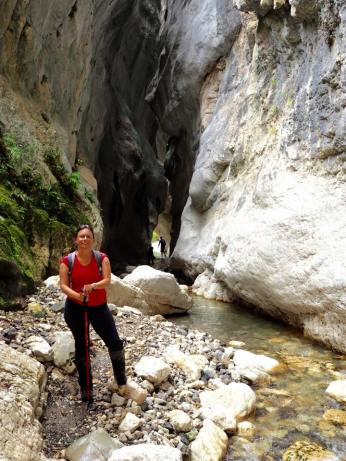 There were quite a few other fellow hikers along the way, most of them New Zealanders from what we could ascertain, including one very elderly looking woman, right through to a man with a baby strapped to his back. It is nice and flat – other than all the clambering over the big rocks, so its a good walk for anyone who doesn’t mind getting a bit wet along the way.

About an hour and a half in each direction, or you can walk a further hour upstream to Isolation hut. But sadly we had to head back. We still had about 4 hours drive ahead of us to get home.

We dropped a few coins in the donations box for the farmers to thank them for the printed map and advice, and also to contribute to their road repairs. Our 4WD car struggled up the shingle rutty track back to the house, with wheels spinning I was beginning to think we weren’t going to make it… next time leave your car at the house!

As we were driving back down the shingle road, I made a mental calculation of where our friends Craig & Kris might be who were sailing their boat Flying Machine back down the coast. We pulled out on to State Highway 1, and cast our eyes out to sea and there they were! A little white sail just a couple of nautical miles offshore. We called up for a chat and wished them well for their long night ahead.