About a month ago I was looking forward to slowing down, a few Christmas parties, and a bit of a tidy up at work before knocking off a few days early to start the celebrations.

They say a week in politics is a long time, and so just one day later, I was organising 22 venues for 22 different meetings in far flung corners of the lower South Island, trying to encourage a group of over 1000 people to attend those meetings, and booking my flights to and from Christchurch to come and help run a process that had to happen before everyone disappears for the rest of the year.

So as my plans for relaxing quickly flew out the window, I found the silver lining in the clouds of work rapidly rolling in, and booked my Mum and Seth tickets to come with me for a quick pre-Christmas adventure.

We flew from Christchurch to Queenstown and picked up a Thrifty Rental Car and drove an hour south to a little town called Lumsden. I went to my meeting and Mum and Seth covered off all the sights, visited a playground, saw a sheep crossing the road, and had a look through a small museum. Then we drove an hour north to a town called Te Anau.

Te Anau is the gateway to the Fiordland National Park. This park covers 1.2 million hectares of wilderness in the South West corner of New Zealand. In this massive area there are a few walking tracks and huts accessible to hikers, hunters and sailors. A couple of places that take tourists for boat trips on the water, and the rest of this wilderness is left exclusively wild.

It is hard to imagine the scale, and even harder to access some of these stunning places, so visiting the Te Anau movie theatre to see the Ata Whenua film is highly recommended. Tickets are $10 per adult and $5 per child.

Te Anau is about two hours drive from Queenstown or Invercargill airports and is based on the side of Lake Te Anau, one of the largest lakes in New Zealand. There is a variety of different accommodation available but we ended up booking a lovely little house on the Holiday Houses website centrally located on a quiet street and a couple of blocks back from the lake for $200 a night.

Whenever you arrive in a different town in NZ, its worth a visit to the local Department of Conservation (DOC) Visitor Information Centre. Here you can gather brochures on the various walks and activities available in the area and get local information on the tracks, huts and the local natural history. The iSite offices give information and bookings on other tourist attractions in the area.

Our first activity was a 10 minute walk along a lakeside track to the Te Anau Bird Sanctuary which is where they rehabilitate injured native birds. Entry is free but they ask for gold coin donations to assist with the running of this facility. We saw kaka, parakeets and the extremely endangered Takahe. They feed the birds at 9.30am in the summer and 10.30am in the winter.

Then we booked ourselves on a Glow Worm cave tour, which involved a 30 minute boat trip across to the other side of the lake, where we disembarked and broke in to small groups for our visit in to the cave. There had been a lot of rain over the last few days and so the water was roaring over the waterfalls inside the caves, carving their way through the rocks. The track was well formed and lit as we ventured in underground. We then boarded a raft and the lights went off as our guide pulled us through the darkness, deep in to the cave which was lit from above with millions of tiny green glow worm lights. It was absolutely spectacular! We weren’t allowed to take photos, but here are a few from their website. The cost was NZD$81 per adult and $22 per child, and was well worth it. 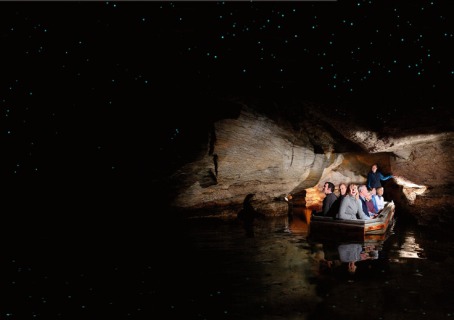 In the afternoon we headed up to the Ivan Wilson Park where you can borrow frisbee’s from the campground next door to play a round of frisbee golf. The wind made this a bit challenging, but it is a great free activity around a beautiful park. In the middle of the park is a small lake which is populated with trout as a children’s fishery. You can get free fishing licenses to fish here, but we didn’t have any gear and it was starting to rain. 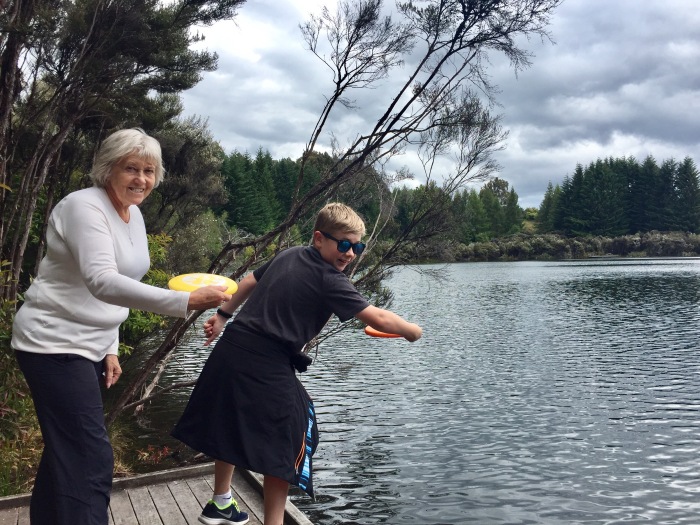 But as we were driving home we saw a sign saying ‘Trout Viewing – $2.00’. There was no one around. We walked down damp concrete stairs to a large metal turnstile leading in to a dark underground corridor. Slightly nervous we opted to send Seth in first, dropping the $2 coin in a slot which allowed the turnstile to move one click around, and he was in. His eyes lit up and so we dropped in more coins to get in as well. What a treat to see huge brown and rainbow trout swimming right in front of our eyes. Well worth a visit. 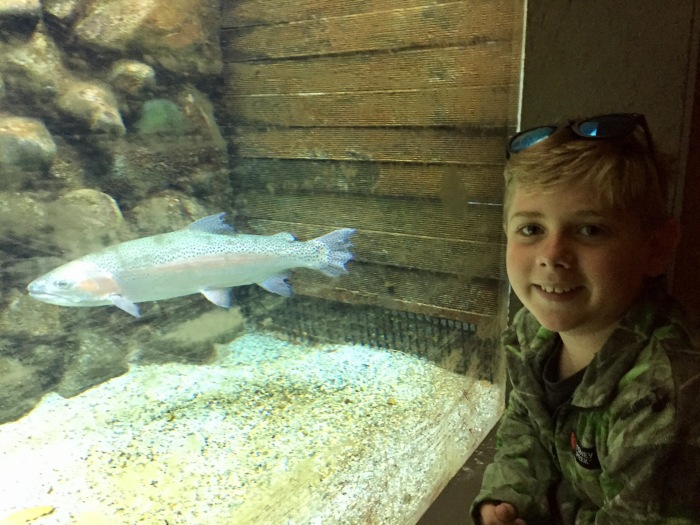 The next day I had to work again so Seth and Mum went down to the mini golf course and hired a quadricycle to explore the town. 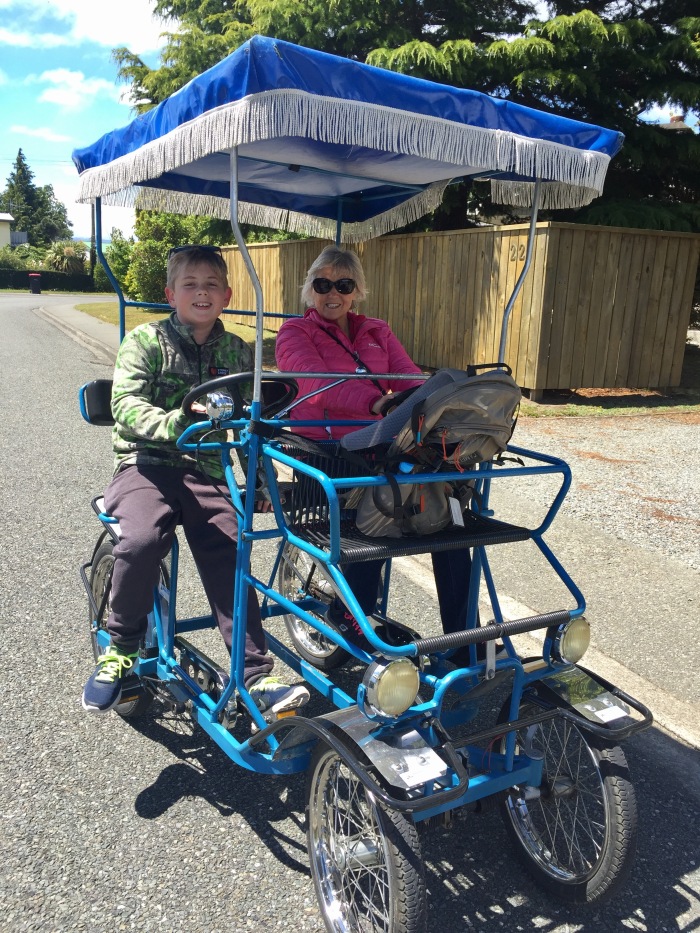 When we arrived in Te Anau we had checked the weather forecast and decided that Tuesday was the best looking day to head over to Milford. Fiordland gets about 3 metres of rain a year, and apparently the waterfalls are spectacular on a rainy day, but we fancied a bit of sunshine and we were not disappointed. We got up super early and were the first on the road at 6am from Te Anau to Milford. Only around 110km but the signs said to allow 2.5 hours. There are heaps of places to stop, view and walk along the way. You could spend a few days exploring just the tracks from this road, and it is the start point for the Routeburn and Keplar great walks. There are a number of DOC campsites along the way as well.

We had a good run through on the road, taking just 1.5 hours to get there and through the one way very dark Homer tunnel to Milford. No sooner had we parked the car, hundreds of other vehicles pulled in behind us. We went for a walk along the foreshore and had a spectacular view of Mitre Peak. The scenery is just spectacular! 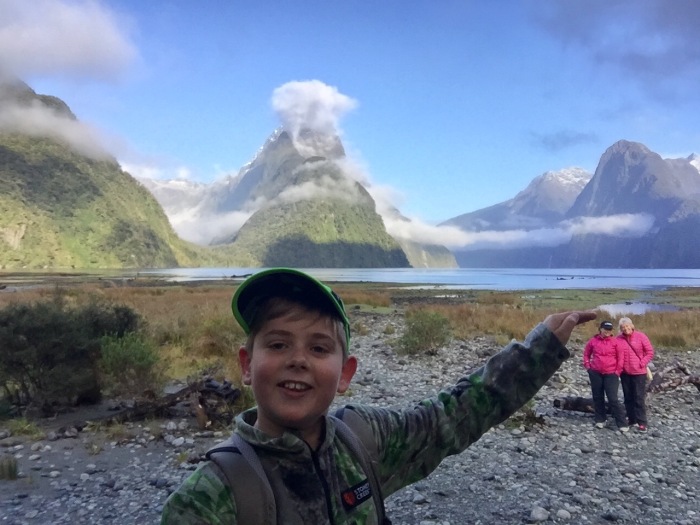 We had booked ourselves on the Southern Discoveries boat tour. There are a number of different operators and they all go around the same route. We chose this company as they also offer a visit to the underwater viewing centre and sea kayaking. We headed all the way out to the Tasman Sea and back in again, and then went kayaking and had a look at the black coral in the underwater centre. 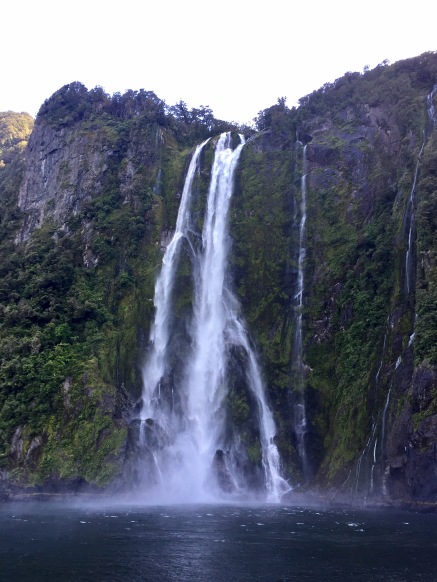 When we got back to the wharf there were about 80 coaches parked up, and the other car parks were chocka block too. The place was absolutely heaving with people! Stunning but somewhat spoilt by its own popularity.

We scoffed our sandwiches and then hit the road to explore some of the sights on the way back. We stopped at the Chasm waterfall and the mirror lakes. There are heaps of walks along the way, and much less crowded and touristy than what we had experienced in Milford itself. 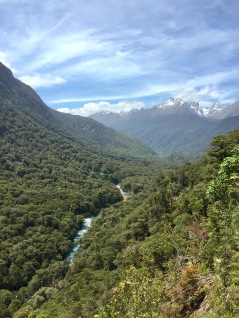 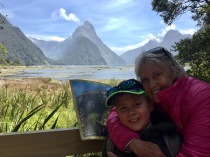 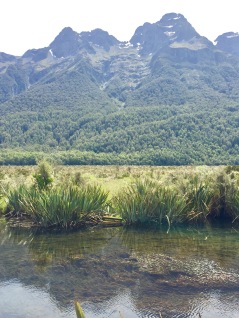 The next day we were off to a little town called Winton for more work. About an hour and a half’s drive South of Te Anau. We followed the Southern Scenic Route and stopped at Clifden along the way to see the historic swing bridge and then to explore the Clifden Caves.

The caves were signposted on the road and positioned on a farmland hillside. We glanced at the sign outside which said it was 10 minutes from one entrance to the other entrance. Looks good! I grabbed my headlamp torch and we scrambled over the rocks and in to the darkness. The wide entrance soon narrowed and we had to climb down through a narrow hole and then crawl along as the cave ceiling lowered. Eventually it opened up in to a large area of small stalactites and limestone formations.

It was rocky, muddy and slippery underfoot, and as we got further and further through the tunnel I began to worry about the last time I charged my headlamp and what would we do if the battery ran out… There were so many different tunnels, it would be impossible to find your way through without light. I encouraged Seth to go faster, as we scrambled, crawled and slipped our way through the challenging terrain. Eventually we met another couple who said they could go no further.

I went ahead to inspect. There was a deep pool, about three metres diameter surrounded by steep slippery looking sides. The cave continued on the other side. Not fancying a swim, and doubting our ability to shimmy around the sides, we decided to turn around…

By this stage I was really concerned about the battery life in my torch, so we were moving pretty quickly backtracking our way through the cave, attempting to sound relaxed to Seth, but secretly stressing out. Thank goodness we came across the other couple as they helped me up a particularly steep slippery bit that I wasn’t sure I would have made it back up without their help!

About half an hour later we emerged back at the first entrance, scratched, tired, and completely covered in mud… just a bit too much adventure than I was anticipating. Thank goodness for the brilliant LED Lenser headlamp torch! 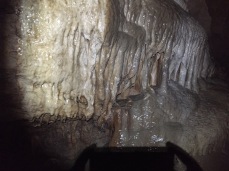 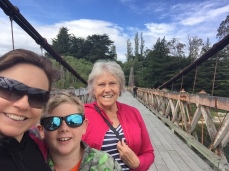 After all that excitement I went off to do some work, and the next day we went to Queenstown. This is the adventure capital of NZ and again the place was heaving with tourists. We queued up and went up the Gondola for some spectacular views over Lake Wakatipu while Seth met up with his friends Bailey & Paige went on the luge. 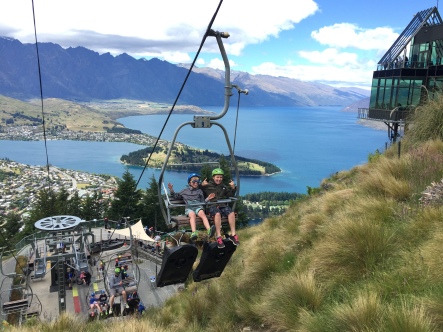 Then it was time for the adventure to end. We headed home, threw on a load of washing and started packing for the next adventure – Japan!!

If you happen to be coming to Southland, you must also visit: