Ocean currents for sailors are like those moving walkways you find at airports. If you catch one going in the right direction then you can considerably increase your speed and get a free ride along an ocean conveyor belt towards your destination.

The Ocean Yachtmaster syllabus requires you to learn about the earths major currents, and hopefully then you can use them in your favour.

Ocean currents are created by a number of different factors including wind, Coriolis effect (the earth’s spin), salinity, the shape of the continents and temperature differences. Not only are they handy for sailors, but they also play an essential role in distributing nutrients and influencing the climate of the earth.

The spirals in each Ocean are known as Gyres. There are five major Gyres: Indian Ocean, North Atlantic, South Atlantic, North Pacific & South Pacific. These gyres create big vortexes in the middle where large amounts of plastic have been gathering.

Deep ocean currents are influenced by density, salinity and temperature differences. Deep currents move a lot more slowly than surface currents. Water at the Antarctic is extremely cold, dense and salty. As the pure water freezes it squeezes out a very salty ‘brine’. This then sinks and flows slowly northwards. A similar thing occurs at the North Pole.

A couple of well known currents are the Gulf Stream, which sailors from USA have to cross to get to the Caribbean. This current can flow at up to 6kts I believe.

Also the Humboldt or Peru current which is caused by cold nutrient rich water upwelling. This current is responsible for providing the rich marine diversity in the Galapagos.

As well as the major currents, there are many more smaller localised currents. These are generally influenced by the tides and topography of the area. There is a current that flows north along the East Coast of the South Island of New Zealand that really slows our progress when we are sailing home from the Marlborough Sounds every year!

So currents can really help or hinder an ocean voyage. It is worth researching the prevailing currents when you are doing a passage plan and aim to use them to your best advantage. 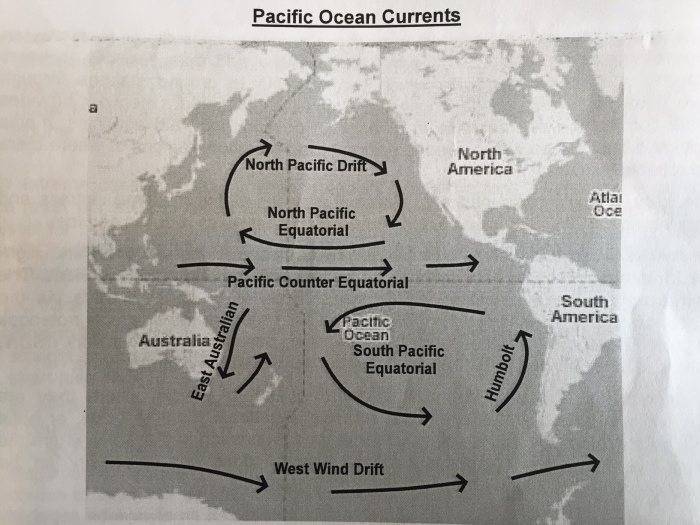 Any other current advice or experience? Please add your comments below 🙂