A special thanks to everyone who is still reading my numerous Coastal Skipper revision posts in preparation for the Ocean Yachtmaster exam. I have certainly dredged up some things from the depths of my brain that had long been forgotten.

I am flitting around with topics all over the place, which is just typical of my personality. So while I am doing a bit of Meteorology here, and a bit of Navigation there, what I am really doing is procrastinating about having to study the Celestial Navigation stuff again. I figure if I leave that bit till last then it will be fresh in my mind when I do actually sit the exam.

If you would like to do a proper online navigation course, I can highly recommend: https://sistershiptraining.com

So if you are a bit rusty on your navigation skills, or if you are just beginning, then hopefully you will enjoy this post. Lets go right back to the beginning:

To be able to describe your position anywhere in the world, you can use Latitude and Longitude. These numbers relate to a grid pattern on the earth.

Longitude is described in degrees either East or West of Greenwich – Greenwich is known as the Prime Meridian. East covers most most of Europe, Africa, Asia, Australia, New Zealand and half the Pacific. West covers most of the UK, Spain, the West Coast of Africa, the Atlantic, The Americas and the other half of the Pacific.

Latitude is always written first. The position is given in degrees, minutes and decimals of a minute.

So if you know that the latitude is South and the longitude is East – then you can automatically know that the position is somewhere in the Southern Hemisphere – somewhere between Africa, Australia and New Zealand – ish.

If you know that the latitude is North and the Longitude is West – then the position is somewhere in the Northern Hemisphere between the UK, America and Hawaii – ish.

1 Nautical Mile = 1852 metres. A nautical mile is 1 minute of Latitude. Latitude is marked on the left and right hand side of nautical charts. If you are taking distance measurements then you must remember to do this on the left or right hand side of the chart and not the top or bottom. The top and bottom of the chart is Longitude and longitude degrees do not equal 1 nautical mile.

When working out time, it is best to use the 24 hour clock. To convert 3.75 hours in to minutes:

To convert 45 minutes in to hours + decimal

When reading a compass or describing a course, use three figures – i.e. 045º as opposed to 45º

There are 60′ or minutes in an arc

Then you get decimals of a minute.

Did you know that Magnetic North moves around? The amount that it varies depends on your position on the earth, and it changes from year to year. So your magnetic compass points to Magnetic North, but all your charts are drawn with the aspect of True North. Variation is the difference between Magnetic North and True North. The Variation figure can be found on the compass rose on a chart.

All courses should be converted to True courses before being plotted on the chart.

You can figure out whether to add or subtract the Variation from the compass reading with the wee rhyme below:

So that really means you add the Variation to the compass when it is East and you subtract it when it is West.

Deviation is another compass error but this is caused by magnetic influences from the boat. You can read more about deviation and how to calculate it here.

So if you have a course you are steering on your compass you need to convert it from Compass to Magnetic and from Magnetic to True to get the True course and vice versa.

To remember the order in which to apply the Deviation and Variation, I remember it with the mnemonic: “Cadbury Dairy Milk Very Tasty” There is another one going back the other way which is “True Virgins Make Dull Company” – I think I prefer the chocolate one…

You can then do this in the opposite direction to convert a True course to a course to steer on your compass.

If variation and deviation are in the same direction, add them together. If they are in opposite directions subtract the smallest from the largest.

How to do it

If you are using a hand bearing compass you assume that there is no deviation – just don’t stand too close to any magnetic stuff if you can!

A Compass Bearing is the direction of the object taken from the boat when using a hand bearing compass. You assume that there is no deviation.

A Relative Bearing, is relative to the boat. So dead ahead is 000ºR and dead astern is 180ºR. If you take your True Course (that you are steering) and add the relative bearing then you get the true bearing.

To convert a relative bearing to a True bearing – add 360 and then take off the True heading.

A Transit Bearing is when two objects are seen exactly in line with each other. This means that your vessel lays somewhere on this line. Transit bearings are the fastest most accurate way of determining a position line as no calculations are necessary (Yay!!) You do not need to apply variation or deviation. Leading lights are a good example of transit bearings. When a pair of leading lights appear in transit, they form a line along which the vessel should travel.

You can also have light sectors where usually red lights indicate an area of danger – or the port side of a channel for example.

You can use Transit bearings to measure your compass deviation.

Radars can either be stabilized and linked to a compass, or un-stabilized and 000º is the direction in which the vessel is heading – i.e. head up.

Head up display will only give you relative bearings – i.e. in relation to where you vessel is heading.

EBL is an electronic bearing line. You can track your relative motion travelling past a landmark. You can use the range lines to see if you are drifting closer to the coast as you travel past and use this to ascertain any leeway. This is called Parallel Indexing.

This is another method of ascertaining your position. To be used in combination with another position fixing method.

Wind affects the boats horizontal movement through the water but has little effect on the water itself. Tidal streams and currents are movements of water so they have to be considered separately.

Wind is expressed in the direction from which it is blowing from. I.e. a Southerly wind is coming from the South.

At sea wind speed is measured by an anemometer, or by its effect on the sea and referring that to the Beaufort wind scale.

Wind speed is measured in a few different ways: knots, meters per second, km per hour, or as a force on the Beaufort scale.

The side of the boat facing the wind is called the Windward side. The side away from the wind is the leeward side.

The difference between the course you are steering and the course the boat is travelling through the water is called the leeway angle.

The water track is always downwind of the boats true course.

The only way to measure the true effects of the wind is by observation and experience. The boat’s wake can provide some clues to the water track.

Speed through the water

The log measures the boat speed through the water. Log speed does not include the effects of a head on or following tide. Some logs can also calculate ground speed.

Tides are the vertical movement of water. This movement also causes horizontal movement called tidal streams. This is measured in:

As the tide rises the inward flow of water is called a flood tide. It is displayed by an arrow with feathers on it.

The outward flow is the ebb tide – an arrow with no feathers.

Slack water is the interval in between the two streams.

Tidal streams are sometimes measured and there may be a tidal diamond on the chart with further information displayed in the corner of the chart. It will tell you the direction and speed (in kts) of the tidal stream. Sp stands for spring tide and Np stands for Neap tide.

Note that the tidal direction is the direction that it is flowing TOWARDS. They are also always true directions.

Swells, rivers after rain, low pressure systems can effect the tides.  Tides can also create overfalls, eddies and rips/races – i.e. disturbed water. Which can make navigating in these areas difficult.

Currents are a continuous flow in one direction and are displayed with a wiggly arrow. Currents are described in the direction they are flowing – so a Southerly wind and a northerly current are both heading in the same direction.

GPS will calculate your speed relative to the ground.

OK so here is how you do it… 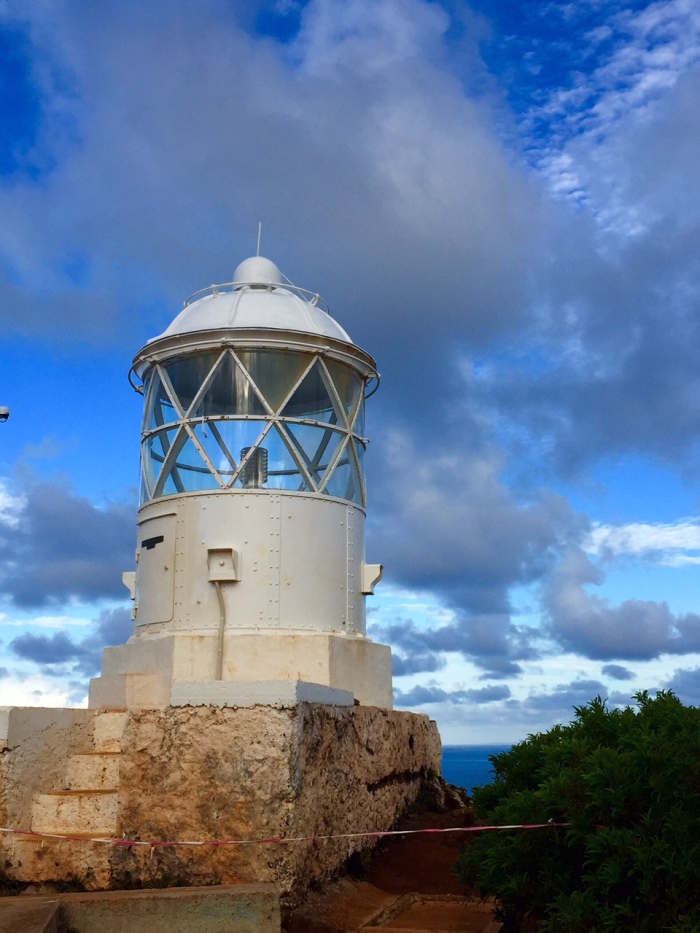 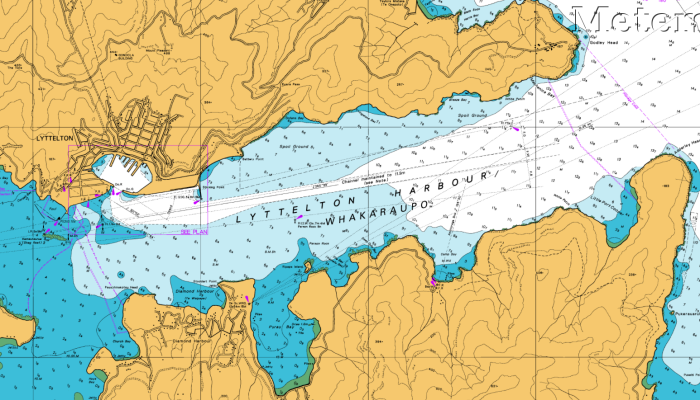 When you are describing your position to someone over the radio, you can express it in Latitude and Longitude or Bearing and Distance.

When using a bearing you should express your position to or from that landmark in True.

For example – if we were aproaching the Lyttelton Harbour entrance, we would say that we were two nautical miles North East of Godley Head (as opposed to expressing it as a distance & bearing from your boat – where Godley Head would be two nautical miles South West of your position) Expressing your location in this way means that people can go straight to the landmark on the chart and then plot your position from there, as opposed to trying to do it backwards…

Overhead obstacles like bridges are measured from a different level – mean high water springs – or the highest astronomical tide. This means that there is usually less water (or more clearance) available, depending on the tide.

To work out the height of the tide click here.

Charts provide all sorts of valuable information for sailors. One of the very important things is detailing hazards below the water that you can’t necessarily see. They are indicated on the chart as follows:

Rocks that are either just below the water line, or that cover and uncover with the tide are marked as follows: 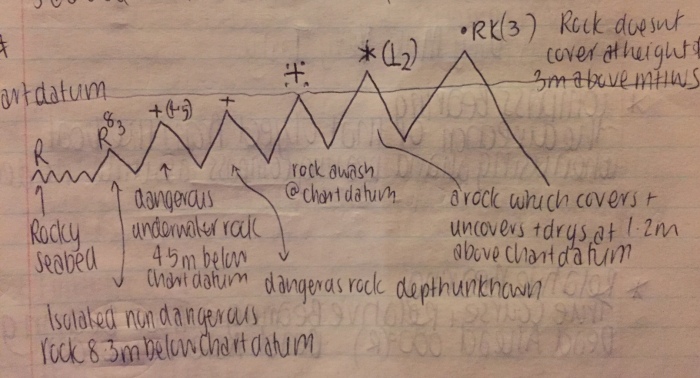 Lighthouses are described on the chart. Their different flashing signals allow you to identify which light you are looking at. You can use lighthouses to take bearings from, raise or dip them over the horizon and during the day use them for measuring vertical sextant angles. 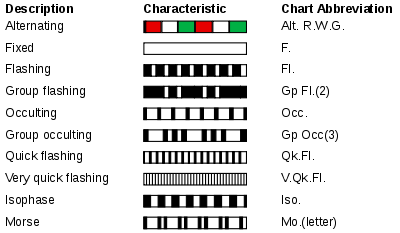 With GPS being so easy to use these days, it is really easy to not use these traditional navigation techniques. Do you still use paper charts and manually plot your course?

Tune in next time when I talk about position lines!

To learn more useful navigation techniques check out my posts on calculating distance off by vertical sextant angle, horizontal sextant angle and raising and dipping lights and landmarks.